Diocese of Helsinki: No TLM for A Whole Year

How Innocent is the Pope

The Pope says some beautiful words about the reform of the reform.  Then he goes back and names Bishops who do the opposite. by Sari Hiltunen 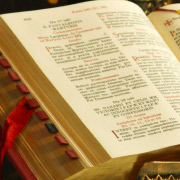 (kreuz.net)  In the Diocese of Helsinki there hasn't been an Old Mass celebrated for over a year.

It's too expensive a Mass?

For the past few years, the Diocese was regularly visited by priests from the Society of St. Peter from abroad.

Then the Diocesan administration explained that the Catholic laity ought to finance these visits.

Actually, among the Traditionalists are mostly young families with many children.  They don't have the financial means.

The Old Mass as a Magnet

For the spiritual formation this situation is a catastrophe.

Till now the Traditionalist of the Diocese have even produced vocations.

Many converts have found their way to the Church through the Old Mass.

The unbeneficial influence of Opus Dei

It is no contradiction that his General Vicar is a priest of the Personal Prelature of Opus Dei.

He is the Spanish born Fr. Ramon Goyarrola (43).

Opus Dei has no potential for reform

Priests of Opus Dei are also active in the Diocesan administration.

It is a publicly stated goal of Opus Dei to succeed Bishop Sippo's Diocese.

With the introduction of the Personal Prelature into the Diocese things haven't improved in the least.

English Instead of Latin

The most recent step:  The Diocesan administration want to cancel the only Novus Ordo Eucharistic Celebration in the Latin Language, which has been held every Sunday in the Cathedral since the end of the Pastoral Council.

The service is well attended.  It takes place at 9:45.

In its place there will be an English Eucharistic Celebration, although there is already an English Mass on Sundays in Helsinki.

Since the appointment of the Bishop and General Vicar, female ministers have been introduced.

The interior of a parish church in Helsinki was destroyed under the pretext of restoration.

New order children -- and youth -- were sent on a summer camp with the homosexual friendly Lutherans.

Even the Diocesan festival took place this year -- even on the Feast of the Assumption -- in a protestantic "church" building.

The Problem is in Rome

The Diocese of Helsinki finds itself in a difficult financial situation.  It doesn't receive the privilege of state taxes like the German church does.

Otherwise, it is stuck on the course with the Old Liberals, who are not know  to engage themselves for the Church.

Because of the financial need Msgr Sippo has to have his residence moved to the former retreat house "Stella Maris" outside of Helsinki.

From there he can indulge himself in his interest in a mindless ecumenism.

The current Pope has clearly authorized it.

Because he has named countless Bishops in the mean time, who think and operate similarly.

Posted by Tancred at 2:09 PM No comments: