Pope: "I'd Rather Resign"

(Rome) Pope Francis is on the mend. After being in a wheelchair for some time, he appeared in public this week with a cane. On Monday he expressed himself categorically.

At the general audience on Wednesday, the head of the Church was seen in public for the first time with a walking stick. The wheelchair that had accompanied him for the past few weeks is no longer needed.

A photo had previously been circulated from a private audience showing Francis with Father Vyacheslav Grynevych, Secretary General of Caritas Ukraine, and Tetiana Stavnych, Chair of Caritas Ukraine. In this photo, he was already seen with a walking stick.

Sandro Magister, on the other hand, reported a special event. On Monday, Pope Francis addressed his knee condition during an audience with the Italian bishops in Aula Paolo VI, which took place behind closed doors and without any media coverage. He said as Magister writes:

"(...) that he has no intention of undergoing any kind of surgery with an anesthetic that is getting him into trouble with his head like after the colon surgery a few months ago, so now he's saying, 'I'd rather resign than  have surgery'.”

The anesthetic during the intestinal operation made things difficult for the head of the Church. The matter was only rumored to the public. At the time, a complication related to the operation was suspected. 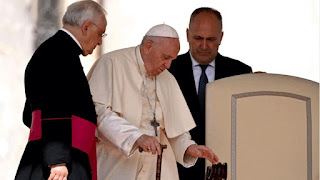 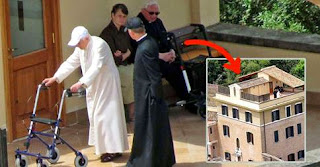 Archbishop Gänswein: The legs are dragging, but his spirit and his health are in good shape

Rome (kath.net / CBA) Benedict XVI. is walking with walker: An appropriate press photo is not beneficial, in the words of Archbishop George Gänswein, for speculation about the state of the emeritus pope. "He's fine, the legs drag a bit, but his spirit and his health are in good shape,” said his private secretary Gänswein said on Thursday in the course of a lecture in Rome. Benedict XVI. has been using a walker for two or three weeks during his walks.

"He just realized that he easily falls while walking," says Gänswein. The Italian magazine "Oggi" had published a photo this week, that the the emeritus pope relies on a walker.

Lorne Gunter has a column about the abortion/breast cancer thing Andrea mentioned earlier. Personally, I’m not all that excited. I find that being afraid of getting breast cancer is not exactly a stellar reason to choose not to abort a pregnancy, and besides, it’s not right to scare people with risks that appear to be (if I understood correctly) fairly small. But there is a but. Two, actually.

One: If there is a reasonably good reason to believe that a procedure might increase certain risks (cancer, depression, etc.) and/or have undesirable side effects, it simply is wrong not to mention those risks and side effects and make sure the patient understands them before performing the procedure. If relevant information is suppressed, the choice can’t be free.

Read Further...
Posted by Tancred at 8:37 PM No comments: