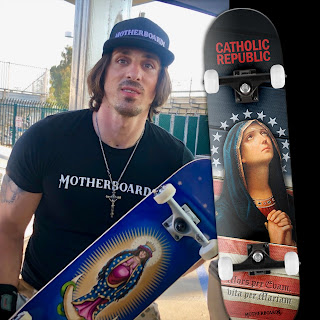 Edit: bummer dude.  Couldn't have happened to a nicer guy!

Garces Memorial High School has apparently dismissed a theology teacher after more than 100 students, parents and alumni signed an online petition complaining that he’s been spreading “unacceptable messages of ignorance and hate” on social media and in the classroom.

Garces teacher Timothy Gordon has some strong opinions about Black Lives Matter, about sexual orientation and about street violence, and they seem to have cost him his job.

Americans watch, and in many cases participate in the marches for social justice taking place in their communities, viewing them through the lens of their own experiences and biases. Gordon is no different in that regard. He expresses those views often too — on Twitter, Instagram and in his own regular webcast, Rules for Retrogrades.

Edit: after condemning unnatural acts between married couples, an Orthodox Bishop not only finds himself the odd man out among Cyprus’ episcopate, but he has narrowly avoided being charged with hate speech against aberrosexuals. Aberrosexuality was still punishable in Cyprus until 1998, but they decided that membership in the satanic European Union was more important than having a Godly society.  It’s amusing to see one of his brother bishops echoing Patriarch Bartolomeos by saying he has “no business in a married couple’s bedroom”. Well, Bishop, what goes on in + Neophytos’ diocese is none of your business, but I digress. This Bishop has remained firm in his position and was ready to face jail in the increasingly evil island Republic that has been home for the Orthodox Christians for two thousand years.

Cyrpus’ Attorney General has decided that no hate crime exists and will not prosecute the bishop, but evil voices persist that would like to silence anyone, be he bishop or layman, who would dare to condemn the evils of Sodom.

Edit:  HOW DARE YOU!  That's been the response so far.  What critics of the following article lack in clarity, organization of thoughts into coherent arguments, they more than make up for in sheer, blazing incoherence and rage, like this article here.

Brendan O'Neill just makes a statement of fact, and now he's the anti-Christ. 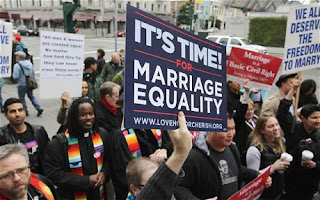 [Telegraph] Apparently if you oppose gay marriage you are a dumb, ill-informed, brainwashed, knuckle-dragging hick and bigot. At least that’s the message coming out of liberal circles in America this week, as supporters of gay marriage look with disgust upon the people of North Carolina for voting in favour of Amendment 1. A majority of North Carolina’s voters – 61 per cent – voted for the amendment to the state’s constitution, which says: “Marriage between one man and one woman is the only domestic legal union that shall be valid or recognised in this state.” For doing this, for having the temerity to say that marriage should stay as it is, they have been subjected to extraordinary levels of abuse and ridicule.

The media says they’re all “bigots”. Apparently they were driven by a typically Southern hatefulness. In fact, according to the LA Times, “even by Southern standards, [this was a] remarkably mean-spirited initiative”. The LA Times went so far as to argue that President Obama’s newly stated support for gay marriage is “similar” to Abraham Lincoln’s support for the emancipation of slaves, the implication being that it is massively disappointing that modern-day blacks in North Carolina, those ungrateful beneficiaries of Lincoln’s stance, did not vote to “liberate” gays today. Maybe they’ve been brainwashed into hating homos. According to the New Civil Rights Movement, one of the main pro-gay marriage groups in America, in North Carolina “ignorance and hate has enveloped ordinary citizens”, and the support for Amendment 1 shows how “ill-informed, mis-informed and just plain ignorant the citizenry… truly are”.

The idea that hatred and ignorance have “enveloped” the people of North Carolina is widespread. The gay advocacy group Faith in America said voters had been “duped” by religious leaders; they were “uninformed or deceived”. The only reason Amendment 1 passed, says Faith in America, is because of “the populace’s misunderstanding about sexual orientation”. Of course it isn’t possible that voters simply had a considered moral objection to gay marriage – no, they were clearly all brainwashed by religious crazies. The passing of Amendment 1 shows that voters should not be trusted to rule on sensitive moral matters, says the LA Times. Apparently these kind of “anti-gay” votes will continue until “people of conscience put a stop to it by asserting that tyranny of the majority is wrong”. In short, let’s leave the creation of morality to those good people who act on “conscience” rather than to those “ordinary citizens” who have been enveloped by “hate and ignorance”.

Edit:   Here is one of the bar owners, Tom Rivers, with a smug and irrepressible grin on his face in a recent article in a local Baltimore paper. As of yet he hasn't said he will open up a Simonbar Schul and call it Mad Dog 20/20.


In a way it's not surprising, since the bar owner has proven to be vulgar and disrespectful in the extreme as when the concerned forum owner of Fisheaters approached him in a very friendly way. I don't think he'd tolerate anyone talking to his female relatives the way he wrote to her by completely unnecessary verbal putrescence.

It's also not surprising that the media, both local and national has been unsympathetic and even disrespectful in their own right.  Local Baltimore Fox affiliate lied when it said that it tried to contact leaders of the group opposed to "Ale Mary's" blasphemy initially.  They still haven't contacted anyone.  They also weren't interested in Tom River's threatening and offensive behavior either.

Despite attempting to justify this farce, they've appealed to the Archdiocese which gave far less than a resounding endorsement, and claimed to have a certificate that justifies the objects use.  We've tried to respectfully contact the Archdiocese, but no further clarification has been given.

We'll assume that is a green light for more prayer and fasting.

There is going to be a rosary said before the bar on the Sunday after Corpus Christi at 230pm.  All Catholics and non-Catholics who find this sort of thing detestable are invited to attend and show solidarity.

Here are some of the other blogs:

The Sissyness of Catholic Bashers Fisheaters


Here's the back story from a local blog:

Edit: What does Foxman do for a living?


New York, NY, September 16, 2011 … The Anti-Defamation League (ADL) urges the Vatican to ensure that a breakaway Catholic sect which teaches anti-Judaism will be required to accept the church's official positive teachings about Jews and Judaism before they are fully accepted back into the Roman Catholic Church.
The Vatican announced earlier this week that in order for The Society of St. Pius X to gain full reconciliation with the church, SSPX must accept some core church teachings, but they have not been made public.
It was unclear from news reports and Vatican statements whether the landmark reforms of the Second Vatican Council and subsequent Vatican teachings -  which reversed nearly 2,000 years of church-based anti-Semitism, repudiated the deicide charge against Jews, and called for positive and respectful interfaith relations - were included among these latest requirements.