On December 18, Pope Francis appointed his house Vaticanista Andrea Tornielli editor of all Vatican media. The office was newly created.
The informal papal spokesman has become an official one. Losers included the Vatican Press Office. The question was how Vatican spokesmen and papal speakers should coexist.
The question has become obsolete with the resignation of Vatican spokesman Greg Burke.
The American journalist was appointed in 2015 as the deputy of the then Vatican spokesman P. Federico Lombardi SJ. On August 1, 2016, he has since taken over his office. He fulfilled his task faithfully, but he did not have it easy with Francis and his communication policy. Burke failed to get close to the Pope. A relationship of trust was denied by the head of the Church.
While Andrea Tornielli had direct access to Pope Francis from the very beginning, Burke's predecessor, P. Lombardi, was not informed about some of the actions or only inadequately. His answers to journalistic questions were sometimes a sweat-splitting balancing act.
Text: Giuseppe Nardi
Image: Vatican.va (screenshot)

Trans: Tancred vekron99@hotmail.com AMDG
Posted by Tancred at 10:57 AM 1 comment: 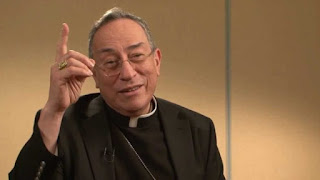 
Burke did not make a direct connection with Maradiaga. According to L'Espresso, the "irregularities" do not concern the extra payments made to the Cardinal, but rather "conspicuous" millions of euros in money transfer, for which the Auxiliary Bishop of the Archdiocese, Juan Jose Pineda, is responsible.
It was also unequivocally implied that Pineda could hardly effect the money transfers without the knowledge of Cardinal Maradiaga. This was probably even done on his behalf. They are related to London financial services providers, including Leman Wealth Management. The millions were deposited in German banks. Part of the money should now be "gone".
According to Vatican spokesman Greg Burke, the Pope has given the order to go in search of the money.
Cardinal Maradiaga positioned himself last spring as a potential successor to Pope Francis. This should be, as much as can be foreseen at least now, no longer the case.
Text: Giuseppe Nardi
Image: Youtube / Wikicommons / Annus fidei
Trans: Tancred vekron99@hotmail.com
Link to Katholisches...
AMDG
Posted by Tancred at 6:21 AM 6 comments:

Pope in Colombia: No Special Meeting with Venezuela's Bishops

Vatican spokesman Burke: Possibly an informal conversation with guerrilla group ELN, who will ask the Pope for forgiveness for the murder of Bishop Jaramillo.

Vatican City-Bogota (kath.net/KAT) Vatican spokesman Greg Burke has confirmed a meeting with the bishops of Venezuela in Pope Francis' official visit program to Colombia. There is also no meeting with the former guerrilla group FARC and other opposition groups such as the ELN. Informal encounters and conversations with Venezuelan bishops during the trip are, however, probable. In addition, two cardinals of the crisis state are coming to Bogota airport to receive the Pope.

During his travels to Colombia, Pope Francis is concerned primarily with pastoral questions, although the peace process will also play an important role, said Burke. Pope Francis has visited Colombia twice during his time as a bishop, as well as twice as a priest in the 1970s; he had journeyed to the cities of Bogota, Medellin, and La Ceja.

The opening day (7 September) in Bogota will be entitled, "Handicrafts of Peace, Promoter of Life". On the 8th of September in the village of Villavicencio "Reconciliation with God, with the Colombians and with nature" will be in the foreground. In Medellin (September 9), the theme of "Christian life as a reunion", in Cartagena (September 10) is finally about human dignity and human rights.

Further details of the trip were revealed by the Vatican: The outward flight is handled via the airline Alitalia, the return flight with the Colombian Avianca.

Whether a meeting with the guerrillas does not actually take place during the Colombian trip is still questionable, despite Vatican denials. On Friday, representatives of the rebel group ELN declared that they were seeking to meet with the Pope to officially ask forgiveness for their "Mistake" of the assassination of Bishop Jesus Emilio Jaramillo Monsalve, said the Colombian radio station RCN radio on its website.

Bishop Jaramillo (1916-1989) was regarded as an opponent of the left-wing ELN guerrillas in the 1980s with his initiatives for small-scale farmers and indigenous peoples in his diocese, Arauca, against whose violence he also expressed public disapproval. The militia then murdered the then 73-year-old bishop on 2 October 1989. Pope Francis will beatify the "Prophet and Martyr of Peace," which is the inscription on Jaramillo's gravestone, on September 8th in Villavicencio. On the same day there will also be a reconciliation gesture with victims of violence in Colombia.

The rumor has not been confirmed, but a change of the Vice Vatican Spokesman has been announced.  So far, the Passionist Father Ciro Benedettini from the tiny country of San Marino is Lombardi's deputy as the Vatican spokesman. Father Benedettini was introduced in 1994 by Navarro-Valls in the press-service, and appointed in 1995 as deputy director. After 20 years there is now a change. Until January 31, 2016 Father Benedettini  will hold this office. From February 1, the American Greg Burke will be  Lombardi's new deputy.


Greg Burke began in the 1980s as Rome correspondent of the weekly National Catholic Register, from 1994 he was in the same function for  Time Magazine and from 2001 for Fox News. In 2012, he was appointed under Benedict XVI.  as Communication Advisor to the Vatican Secretariat of State. The appointment was seen in the context of ongoing criticism about inadequate public relations of the Holy See and a bad media image of the German pope.   Critics then held   the then Cardinal Secretary of State Tarcisio Bertone responsible for this.

Then came the unexpected resignation of Benedict XVI. and with Pope Francis everything seemed quite different. It was said that Burke was held in disgrace  because of his appointment by Benedict XVI. membership of the Opus Dei by the new Church leadership. Indeed,the American had become silent, even before he could put the expectations placed in him to the test. Senior Communications Adviser Burke got his own office at the Secretary of State but his exact field of responsibility was not defined.
With his appointment as deputy Vatican spokesman, these voices have been proven wrong, while those  who predicted that the Jesuit Lombardi would be replaced by Burke in 2012  have received new confirmation.  Father Lombardi has been Vatican spokesman since 2006.  In August 2017, he will be 75 years of age.