Masses for Remarried Divorced and Aberrosexuals with Communion "For Everyone" 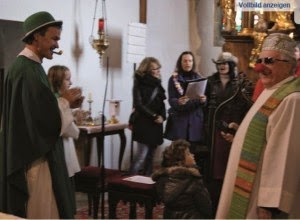 (Vienna) A "disobedient" priest and a suspended deacon "anticipate the Vatican." They have announced that they will be offering this  summer of  their own "services for remarried divorcees, gays, lesbians and single mothers" as Die Kleine Zeitung Graz reported.
The whole thing takes place in the Diocese of Graz-Seckau in Pfarrverband Kirchberg an der Raab-St. Margaret in the Austrian province of Styria. Bernhard Preiss, the pastor of the parish association, is one of the "disobedient" priests of the Pfarrers Initiative of the former Vienna Vicar General and Caritas Director, Helmut Schüller.

For Preiss and his deacon there are "signs of change". Starting this  summer the Parish Community will offer  a "service" for "remarried divorcees, homosexuals and single mothers", in which "all can receive Communion." The initiator and organizer is Deacon Gottfried Url, who defers together with pastor Preiß,  to Pope Francis. Deacon Url is actually no longer a Deacon because he was suspended from duty. He is himself  divorced and remarried and is thus is engaged in his own self-interest.
"I have now read many texts of the Pope - and everywhere  Francis writes of compassion and solidarity", said Url who is quoted by the Kleine Zeitung and draws  arbitrary and just as far-reaching conclusions. "My office has been made quiescent, but when I'm asked, I help", is how Url describes his idiosyncratic understanding of obedience. He "assists" at funerals, Easter food blessings or, "this year at the Easter Vigil in Loipersdorf".

The fact that a second marriage is not contrary to the ideal of lifelong  bond  is something  of which the deacon is "convinced" for obvious reasons. The teaching of Christ on the sacrament of marriage does not seem essential to the "deacon".  What is "Important"   for him is only, "not to alienate first partner  and not to leave him financially in the lurch." Marriage teaching for him is just a product of Church history, which is why he also does not have to respect this.

"Spring Awakening in the Church" by Pope Francis

Pastor Preiß sees in  Pope Francis a "Spring awakening in the Church." In the new parish Journal 2 /2014 of the parish association, he writes: "Spring Awakening means that new impulses, the Sun of love and fertile rain of trust are also effective in the Church."   The new "Spring Awakening"  Preiß presents in direct connection with the Second Vatican Council, which had overcome "a 400-year long period of intransigence and control.". The Church's doctrine and its defense is reduced by the "disobedient" pastor to  "fears, institutional thinking, ideologies, stubbornness, habits, and questions of power." John XXIII. had  "reformed" the Church by the "vernacular", "people's altar", the "appreciation of laymen versus the Cleric (Priest) in the Church" and the "priesthood of all people." But then  "the reinforced rather re-enforced  reactionary forces."  Now, however, "only with Pope Francis, once again we hear other sounds from Rome."
The Austrian bishops returned from Rome "thrilled and full of praise." Cardinal Schönborn had admitted that they had yet  been too "timid" in Rome for "local church autonomy" and "decentralization". Preiss quotes the Cardinal with the words: "I struck    my bishop 's breast: We have surely trusted too little,  to say what our situation required and how we see things."  "A good, albeit late acknowledgment," says  the rebel Preiss who feels himself confirmed. According to Preiss also quotes the words of the Honduran Cardinal Maradiaga, who criticized  Cardinal Prefect Müller: "The world is my brother is not so. You should be a little flexible when you hear other voices. "

From "Carnival Mass" to "Homo-Liturgy"

For Pastor Preiß there is no Mass, but only "Worship". In  last March 2 he called on all "worshipers" to come "masked" as to the "Carnival Mass" because "God loves to laugh."
Url turns with his "service" to all of those who are "Excluded", he arbitrarily says. The "services" to be held "alternately in Kirchberg and St. Margaret" and  four times a year "on the first Sunday" in season. The first date is going to be 22 June at Kirchberg.
Text: Giuseppe Nardi
Picture: My district (screenshot)
Trans Tancred vekron99@hotmail.com
Link to Katholisches...
AMGD
Posted by Tancred at 9:29 AM 13 comments: