Los Angeles Auxiliary Bishop Robert Barron writes on aleteia.org, that Alec Ryrie's book “Protestants” caused him to look differently at Martin Luther, “for at the core of Luther’s life and theology was an overwhelming experience of grace". He calls Luther’s “religious movement” a “love affair”. And, “Luther was a mystic of grace, someone who had fallen completely in love.”

In realty Luther was a drunkard, who called the Mass “the greatest and most terrible abomination” of all “papal idolatries” (Schmalkald Articles).

“Christ committed adultery first of all with the women at the well about whom St John tell’s us. Was not everybody about Him saying: ‘Whatever has He been doing with her?’ Secondly, with Mary Magdalen, and thirdly with the women taken in adultery whom He dismissed so lightly. Thus even, Christ who was so righteous, must have been guilty of fornication before He died.” (Tischreden, Weimarer Edition, Vol. 2, p. 107).

Or: “I have greater confidence in my wife and my pupils than I have in Christ” (Tischreden, 2397b).

Another Poor Appointment for the USA: Media Celebrity to be Auxiliary of Los Angeles 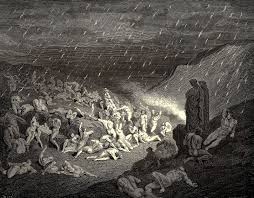 Edit: poor Los Angeles, what have you done to deserve this?

It was reported at 12 noon,  that the Rector of Mundelein Seminary, Father Robert Barron, is to be appointed the Auxiliary Bishop of Los Angeles, California. Barron may not believe anyone's in Hell, but it's certain as Whispers in the Loggia suggests, that his appointment seems calculated to bank on his substantial media presence.  Maybe now that Barron's an Auxiliary in Los Angeles, even fewer of its substantial Catholic population will be going to confession to avoid it?

This appointment is another evil portent of the growing the problems with this papacy and the American Church in general, but it also underscores the continuing nadir of the once promising EWTN and Catholic media in general.

Some have even long been hailing Barron as another Archbishop Fulton Sheen.

Perhaps it's payback for some enthusiastic and uncritical praise for the Socialism in Laudatio Si?

The comparison is ridiculous.