Persecuted Christians Disturb Catholic Interfaith Event -- "You see how the situation has happened in Europe by this attitude, where you live as Christians in the majority and yet are afraid." 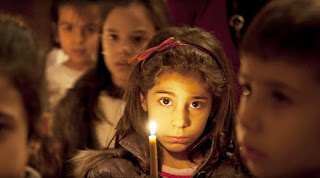 (Rimini) The  meeting organized in 2016 by the Catholic community Communion and Liberation (CL),  which has taken place has cast a new interreligious shadow. [All of these linked articles are German, sorry.] The persecuted Christians of the Middle East "disturb" the desired climate. An Iraqi priest  witnessed the genocide of the Christians in his home,which was made ​​bitter by experience that the West not only looks away, but - if it still has to listen again - responds unwillingly and with opposition.
On the opening there was a Marian Publisher  that had been prohibited from showing representations of Mary  "so as not to offend other religions." This meeting is of such importance that the Italian President and Prime Minister arrived in person. Italy left-Catholic president Sergio Mattarella, let it be known in his welcome address that it's not necessary for "all religions to be fundamentalist." But what does "all religions", in a message of greeting to a Catholic event mean without naming the Islam?
This is the "new interreligious shadow", giving a response of a saturated relativism to challenges, and thus, must necessarily remain inadequate and unsuitable.
At the same time the usual CL representatives like Archbishop Emeritus of Bologna, Cardinal Carlo Caffarra, and the incumbent Archbishop of Ferrara, Luigi Negri, were no longer included in the meeting program.

Also not fitting in the picture is the Iraqi priest Rebwar Basa. Born 38 years ago in Erbil, he is priest of St. George Monastery of Mosul. He comes from the Middle East powder keg, whose fuse was lit in 2011.  He knows the situation of Christians from personal experience, because he himself is one of them. He knows about the persecution of Christians. He knows that Christians are a diminishing minority and are harassed by various Islamic groups in the country, persecuted, expelled and killed. And he also knows from personal experience that even the official state power makes Christian life difficult.

Although Rimini is so far from Mosul, he nevertheless also felt the long shadow of the Middle East conflict cast on the famous seaside resort on the Adriatic Sea, when a statue of Mary must be wrapped in the middle of Italy at a Catholic major event, to be considerate of Muslims. It is the long shadow of Islam. It is above all the long shadow of its own weakness that has plagued European Christianity as an immune deficiency disease, which the Iraqi priest began to feel at the meeting.
Rebwar Basa was a guest at the meeting for three days, told all those who did not turn away, but wanted to learn about the fate of  brothers and sisters in the Middle East. The Catholic  organization Kirche in Not [Church in Need], who works extensively in a special way to help persecuted Christians. KN offered an exhibition on the persecution of Christians, which even Vatican Radio reported.
Last Friday, the first day of the meeting, there was an incredible incident, which is no less incredible than the concealment of a statue of Mary, of which no one knew anything about at that time. However, it fits another incident and gives a worrying picture.

Kirche in Not Informed about Persecuted Christians

For the exhibition Kirche in Not invited Rebwar Basa to give his  testimony.   And the unbelievable happened. The priest described the terrible fate of Iraqi Christians firsthand and was attacked for it from the audience. His credibility was called into question, since what he reported would not be heard by some. The  journalist Franco Bechis present for the newspaper Libero filmed the anachronistic scene and wrote about it in the Sunday edition of his newspaper: "Father Rebwar reported about the Christians  persecuted by Islam and was some were distressed by this message at the meeting."

The priest came to the West, but rather than solidarity he reaped open contradiction. It came to a violent slugfest with "interreligious" and islamophilic Christians. Some of the audience just did not want to believe that what they propose could possibly also yield unpleasant consequences. Others seem to have come specifically to the event in order to bring the already weak voice of Middle Eastern Christians to silence. Kirche in Not is known for its commitment to persecuted Christians. It's a program that does not fit into the predominant, desired image, which is that supposedly "all" religions want nothing but peace, and "all" religions involve equally, "fundamentalist," dangers, as Christianity was not unlike Islam, anyway not better.

For all Islamic groups "are we Christians not the main objective?"

The young priest could not be upset, though - yet had every reason to do so - simply because of the disappointment. "What I am telling, I have experienced in Iraq. I am a witness of what I report. We are  still 300,000 Christians there. Here one has said a true thing that the Sunnis kill Shiites, and Shiites kill Sunnis.That's right, and there are religious, political and economic reasons for this slaughter. But just as much for one as for the other, we are Christians the ultimate goal. This must be said!  Again and again I read that the Christians were the collateral victim of a conflict. No, that's not true: Christians are the main goal! There is a persecution instead, which is a genocide, and we need to talk about it "
Despite the opposition, Father Rebwar answered his critics, who know so little of the fate of Christians in the Middle East   that they aim to suppress it: "You do not trust me? Do not believe me? You could check it yourself: There are media, there are books, there are other witnesses. So you can inform yourselves." The problem is rather something else:

"Often they are afraid to speak, so as not to affect the sensitivity of other religions. Fear not, and not from saying that. You see how the situation has happened in Europe by this attitude, where you live as Christians in the majority and yet are afraid. So you can imagine what we are going through in Iraq, where we comprise only 0.5 percent of the population today. Here with you, there are young Muslims who go to Iraq and Syria to fight, and are ready to die. And your youth is no longer willing to participate in a Mass."