Pope Condemns Calumny: Victims of Persecution by the Sanhedrin Yesterday and Today

Edit: in today’s address, the Holy Father addresses one of the first victims of the Sanhedrin’s persecution of Catholics, St. Stephen, protomartyr and the sin of calumny, as if he could be addressing the false accusations of anti-Semitism. It’s interesting that there are many who wring their hands over these allegations, when a Christian is martyred every five to ten minutes for his faith, where Muslims are baptized in secrecy. Indeed, it’s very hard not to take the Holy Father’s words in any but the most encouraging ways. Here they are from Zenit:

[Zenit]Drawing from the First Reading account of Stephen, the first martyr, being dragged before the Sanhedrin, Pope Francis today strongly condemned the sin of calumny.

At his customary morning Mass in Domus Sanctae Marthae, the Holy Father noted that Stephen was accused of "false witness," and that his enemies chose "the path of calumny.”

Vatican Radio reported on the Holy Father's homily, noting that Francis described calumny as worse than sin and a direct expression of Satan.

"We are all sinners; all of us. We all commit sins. But calumny is something else. It is of course a sin, too, but it is something more. Calumny aims to destroy the work of God, and calumny comes from a very evil thing: it is born of hatred. And hate is the work of Satan. Calumny destroys the work of God in people, in their souls. Calumny uses lies to get ahead. And let us be in no doubt, eh?: Where there is calumny, there is Satan himself," he said.

It’s persecution like this which not only brings to mind martyrs of the past, the very first martyrs who fell victim to the Sanhedrin, but those martyrs of the recent past:

And it so happens that even the leadership of the Church raises a hand against its own champions, in order to shame them and destroy them if possible in an autolesionistic festering. How obedient and eager to serve Roman Catholic Faithful was back in 1997 when Father Paul Marx was unjustly accused of hating Jews:

We reject in the strongest possible terms any suggestion that HLI is anti-Semitic. The allegations of "bigotry" and "anti-Semitism," made by members of the chancery staff and by the news media against HLI are serious and defamatory.

We are deeply saddened that Archbishop Harry Flynn has reneged on his previous commitment to HLI and to Father Paul Marx to celebrate the opening Mass of our international conference of pro-life leaders.

We hold Archbishop Flynn in highest regard. Even as recently as February 24, 1997, we received a warm letter of welcome from him, which included high praise for Fr. Marx. Therefore, we wholeheartedly believe that his actions today are out of character and that he has been ill-advised and ill-served by members of his staff.

Furthermore, we deplore the manner in which this matter has been handled. Since November, we have repeatedly contacted the chancery to request a meeting between the Archbishop and any one of the members of our Board of Directors, all Catholic priests. These requests were repeatedly denied.

Then, upon receipt of false, inflammatory and defamatory information about HLI, rather than communicate directly with our office, the chancery communicated with us through the media, with a story that appeared in the Minneapolis Star-Tribune on Holy Thursday, casting aspersions on the integrity of Fr. Marx and HLI. This news report went statewide. Continuously, our requests to speak with the Archbishop have been denied.

At the same time however, it is evident that a "dialogue" has been conducted between members of the chancery bureaucracy and groups that oppose HLI and the pro-life cause. It is emphatically clear that such groups have an agenda of their own which has nothing to do with "interfaith cooperation." Has ecumenism come to mean abandoning one's own to the lies and calumny of the pro-abortion opposition?

One only need to examine the past — the HLI 1995 World Conference in Montreal for example — to see the well-orchestrated campaign against HLI, which has as its genesis a 1994 report about HLI by Planned Parenthood.

The charge of anti-Semitism is a smokescreen to hide the real agenda of the Culture of Death that HLI meets at World Conferences: Planned Parenthood, the Fight the Right Coalition, Refuse and Resist, Love and Rage, radical feminists, radical gay activists and anarchists.

The Archbishop has been deceived.

"I've been involved with Father Marx in furthering protection for unborn Jewish babies in Israel and North America for more than ten years. Father Marx is providing seed money to mobilize public support for Jewish pro-life efforts. What kind of Anti-Semite does this?" said Levin.

Rabbi Levin pointed out the close working relationship that Fr. Marx has with other Jewish leaders such as Midge Dector, Rabbi Daniel Lapin, Norman Kurland and Dr. Judith Reisman. He also noted that for the past two years Fr. Marx has spearheaded interfaith cooperation with the Jewish community by signing the Judeo Christian Pro-Life Alliance, a document that binds both groups to work on behalf of the unborn of all faiths: Jewish, Christian or Muslim.

"I agree with my Jewish colleague Midge Dector, former contributing editor to Commentary magazine, that 'the charge of anti-Semitism has become, alas, a sinfully cheapened currency, and we feel that it is long since time to put a stop to its...tendentious circulation.'"

"Many secular Jews tend to be overwhelmingly liberal, even supporting abortion on demand. Why else would B'nai Brith or the American Jewish Congress or other such organizations not take a stand on saving the lives of pre-born babies, Jewish or non-Jewish" Levin added.

Rabbi Levin concluded with an invitation to members of the American Jewish Congress to join Human Life International's efforts to protect unborn Jewish babies and support their mothers. 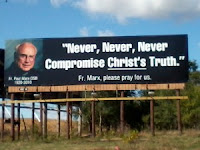 Edit:  Collegeville has been a locus of dissent and a cancerous tumor in the Body of Christ since the days of Dom Virgil Michel when the social reformer alleged to have restored the appreciation for a doctrine which had gone into abeyance, the teaching of the "Mystical Body of Christ" and its social dimension in the Mass.  The reformer monk, like other reformers of the past, was anything but an ideal of the religious life.  He willfully violated the rubrics of the Mass, which is a mortal sin.  Like many revolutionaries, he had a long list of prescriptions which he claimed would address the "injustices" inherent in the Capitalist system, but while he he was short on actually describing how these systemic issues could be addressed, and just what their moral dimension was, he flaunted the authority of the organization he claimed to belong and it is our opinion that even then, long before the Vatican Council and its disasterous aftermath, that he was one of those who, like his mentors and guides, Dom Beauduin and Pius Parsch, worked assiduously to undermine it.

By the time after the Second Vatican Council when Paul VI agonized over the publication of the Church's Encyclical, Humanae Vitae, there were those, including Father Paul Marx's own brother who signed a declaration against it. But it wasn't the rebels who were disciplined and cast out, it was Father Paul Marx, himself an admirer of Father Michel, who was hounded and attacked by the Abbey and the modernists who hated him.

Here's an excerpt from Pine Curtain:

In 1980 the authorities at St. John's Abbey and St. John's University, by underhanded means, forced Father Marx to leave Collegeville and his Human Life Center and carry on his pro-life work elsewhere. The full story of this persecution is told in this book. Benedictines at St. John's, including Father Marx's own brother, Father Michael Marx, OSB, signed a statement contradicting Humanae vitae, Pope Paul IV's official teaching concerning contraception, and the faculty at St. John's University overwhelmingly refused to endorse a statement opposing abortion. Father Marx then went to Washington, with little but an automobile, and started Human Life International, which today is by far the largest pro-life institution in the world. In the same year Pope John Paul II told him: "You are doing the most important work on earth." - "Faithful for Life"

When Father Marx died last year. The present Abbot gave a "homily" which defended St. John's seamless garment approach to doctrine and its heritage of dissent from the rules.

In fact, we cited an article earlier which dealt with the Abbot's attempt to coopt Father Marx's legacy for St. John's, attempting to steal something they don't own.  Full content of the letter still available, here.

1.The Seamless Garment gives Catholics an excuse to vote for pro-abortion politicians on the specious theory that these politicians are, on balance, more pro-life than their anti-abortion opponents because they have good positions on some other issues that impact life. For example, I recall one Seamless Garment evaluation of politicians that rated Senator Ted Kennedy as much more "pro-life" than Senator Jesse Helms! (Kennedy consistently voted for abortion and for public funding of abortion, and Helms was probably the Senate's most stalwart opponent of abortion.)


It also seems we're not alone. Perhaps some of the German farmers in the area, good wholesome sorts, know the real story? Here's the billboard that's up around St. John's. It's not something you'd see at St. John's, because Collegeville, as anyone will tell you, undermines the Catholic Faith in its architecture and everything it does.