Pope Refuses to Receive Dismissed Bishop -- As If -- "Dialog, Mercy and Respect"

(Rome / Asuncion) For days, Bishop Rogelio Livieres Plano has been in Rome and asking to be received by Pope Francis. Vain. Instead, the bishop was removed from office. This  bishop responded  to this treatment with a harsh response. Meanwhile there is public celebration in progressive church circles in Paraguay for his removal.
Bishop Rogelio Livieres Plano of Ciudad del Este is not a man who minces  words. This has made him disliked among Paraguay's bishops, to which until a few years ago, Bishop Fernando Lugo belonged,  the "red bishop" of San Pedro, who preferred to be candidate for a broad leftist coalition as president against the will of Rome and he gave up his episcopate and priesthood. Bishop Livieres is now the victim of an equally surprising and brutal "decapitation" and because he is not a man of arbitrariness, he responded with a  savory letter to the Prefect of the Congregation for Bishops, Cardinal Marc Ouellet.
On the website of the diocese of the dossier from last summer was re-released, with which the diocese had responded to all the rumors and accusations, passed behind closed doors by word of mouth or addressed by the Apostolic Visitor Cardinal Santos Abril y Castello, a personal confidant of the Pope Francis.

The letter to Cardinal Ouellet and the dossier discloses the ethical, but also formal irregularities of a campaign to discredit a bishop, aimed at his deposition,  that has taken place now. "An operation that has an ideological connotation," the Vaticanist Marco Tosatti.
As a "true son of the Church," he accepts the decision, says Bishop Livieres, even if it is "unfounded and arbitrary, for which the Pope must be answerable to God". The bishop's letter continues: "Apart from many human errors that I may have committed, and for which I ask  pardon from God and those who may have suffered, I ask once more firmly that the core of the case is an opposition and an ideological persecution."

Msgr. Livieres who belongs to Opus Dei, was the only "conservative" bishop in Paraguay. A fact that will say something about the situation within the Episcopal Conference and with the reference to the "opposition"  as the bishop says. When Bishop Livieres had by far the largest seminary in the whole country and for miles around, then it depends not least with the attitude of the other bishops. The promotion of priestly vocations has  in much of Latin America  long been in disarray. Cultural barriers to the indigenous population have not been  resolved, the subliminal strong currents of liberation theology is in a "ideological" contrary to the priesthood. Liberal bishops  do their worst.
"The real problem of the Church in Paraguay is the crisis of faith, life and morality, which was further supported and extended by poor training of clergy, together with the laxity of the shepherds," wrote  Bishop Livieres to Cardinal Ouellet.
The bishop never once received the report of the Apostolic Visitator so he could not concretely address  Rome  to justify or defend himself. "If you think the problem of the Church of Paraguay is a problem of the sacristy, which one solves by exchanging the sacristan, one errs fundamentally and tragically."

Dismissal "In Contradiction to the Many Speeches of Dialogue, Compassion and Respect"

Bishop Livieres was never told at any time  of any wrongdoing or even complaints held by Rome, which made it impossible for any reply.. Out of the blue it was carried out without any reason specifying the impeachment. "Contrary to the many speeches of dialogue, compassion, openness, decentralization and respect for the local churches, I was given neither an opportunity to speak with Pope Francis or  the possibility  to make clear doubts or worries. Consequently, I was also not paternally rebuked  by him - or fraternally - how things were seen."
Bishop Livieres ends his letter with the words: "Such a procedure without any formality or undefined and abrupt nature appears to be not very fair. You do not offer room for a legitimate defense or for a reasonable correction of possible errors. From Rome I only obtained pressure to resign. "
Bishop Rogelio Livieres has been in Rome for several days  and asks to be received by the Pope - in vain. In Paraguay, the news of the dismissal was made known in the absence of the bishop. While in his diocese, guesswork and frustration prevail, in other parts of the country the progressive church circles does not hide their joy and  is celebrating the dismissal publicly.

Ex-bishop Lugo Celebrates Dismissal: "Livieres has not worked for the unity of the Church" 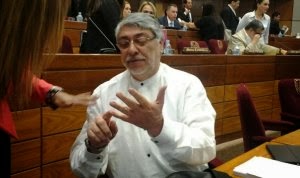 Senator and Ex-Bishop Fernando Lugo
In Paraguay where the episcopate which is thoroughly embossed with liberation theology, Bishop Livieres is an anomaly. Attached to this episcopal row, is also included Fernando Lugo, who a few years ago  preferred, against the will of Rome, to hang up the dignity of Bishop and priesthood, in order to run for a broad leftist coalition. As President, he failed within a short time. Among other things, it was learned that he, as a bishop, had a relationship with a woman and fathered a child.
That was yesterday. Today the  Ex-bishop Lugo, who maintained good contacts with high ecclesiastical dignitaries of Paraguay after his laicization, celebrated the dismissal of Bishop Livieres. The senator said this in an interview for the newspaper ABC."  Pope Francis just does not tolerate any form of irregularities, be they  doctrinal, moral or in personal style" said Senator Lugo even bring up the much-discussed case of the Argentine priest Carlos Urrutigoity, who then years before in the United States was accused of "suspected sexual abuse", but does not see this as the reason of dismissal, because the declaration of the Vatican speaks of "pastoral reasons" and "unity," said Lugo.

Crux of Understanding of the Church and Liberation Theology?

What Livieres is being blamed for, "and what I also have criticized him for," said Lugo, was the fact that he had not contributed  "to the unity of the Church" in Paraguay. Ex-bishop Lugo was among the sharpest of Bishop Livieres' critics among church officials in the country. Bishop Livieres fought  liberation theology as "harmful" and several times raised the criticism that at the seminary of Asuncion, the liberation theology will continue to spread. For this reason, the Bishop decided to pay special attention to an independent priestly formation, which occurred exclusively in his diocese and to peel off from the Archdiocese of Asuncion and the Bishops' Conference in pastoral matters.
Text: Giuseppe Nardi
image: ABC Color (screenshots)
Trans: Tancred vekron99@hotmail.com
Link to Katholisches...
AMDC
Posted by Tancred at 4:13 PM 27 comments: