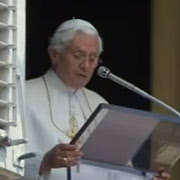 Pope on the Environment

Vatican. In the poor lands in people suffer material need. In the wealthy regions people are dissatisfied and depressed. Pope Benedict XVI said this at yesterday's Angelus Prayer. With reference to the environment -- not perhaps on abortion -- he lamented, "the aggressive character of destruction, with which the last century has been dominated."

Three New Priests for the Immemorial Mass of All Ages

Germany, on Saturday, Jean-Pierre Ricard of Bordeaux blessed three Deacons for the Priestly Society of St. Peter in the Immemorial Rite as Priests. This was according to the site, 'kath-info.de'. The three new priests are Father Clément Darmet from Tarare near Lyon, Father Guilhem de Labarre from Bordeaux and Father Martin Micheal Klein from Cologne.

German. On Saturday, the manager of the e-mail column of Bishop Richard Williamson, Nicholas Wansbutter, is to stop his appeal in muzzled Germany. The German media reported on it yesterday. Actually, Wansbutter published an disclaimer. Bishop Williamson has been at Ecône in Switzerland for the priestly ordinations last weekend.