"The Bishops Abducted in 2013 Live" -- Marian Appearances of Mousseitbé

(Beirut) The two bishops who were abducted in Aleppo in 2013, "are still alive". This was from the Syrian Orthodox Bishop, Daniel Kourié, on the 47th anniversary of the Marian apparition above the cupola of the Peter and Paul Cathedral of Mousseitbé, a suburb of Beirut.
The memorial of the apparition of the Virgin Mary is always on the first Sunday after Easter. This year, the anniversary coincided with the fourth anniversary of the abduction of two bishops in Aleppo. On April 22, 2013, the Syrian Orthodox Bishop of Aleppo, Gregorios Yohanna Ibrahim, and the Greek Orthodox Archbishop of the city, Boulos Yazigi, were abducted.
Bishop Daniel Kourié is the representative of his church for the abduction case. The Commission, led by him, had "knocked at every possible door", in Syria and Lebanon, to find traces of the two bishops.

"Religious and ethnic cleansing in the Middle East"

Bishop Kourié called on the Lebanese state to make the abduction case a "national cause". At the same time, the bishop complained about "religious and ethnic cleansing in the Middle East, especially in Syria, Iraq and Egypt." He criticized the states, which supported these purges under various forms "with men, weapons and money".
The miracles of Mousseitbé have been recognized as genuine by the Syrian Orthodox Church. The other churches in the country took little notice of them "because they were all still fixed on themselves, even to such phenomena as a warning and an appeal to unity, in the face of the first forebodings of the Islamic danger," said Fady Noun , A leading Maronite publicist of Lebanon.
Text: Giuseppe Nardi
Photo: Asianews
Trans: Tancred vekron99@hotmail.com
AMDG 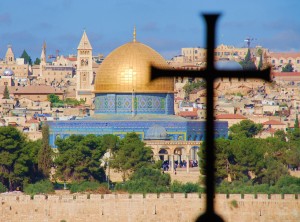 VATICAN CITY (CNS) -- At a synod concerned primarily about peace and the continued presence of Christians in the Holy Land, one of the suggestions made repeatedly was that Catholics, Protestants, Anglicans and Orthodox finally celebrate Easter together each year.

"We truly hope for the unification of the Easter holiday with the Orthodox churches," Latin-rite Auxiliary Bishop William H. Shomali of Jerusalem told the Synod of Bishops for the Middle East Oct. 14.

Celebrating Easter on the same day also implies observing Lent together, he said, which would give Catholics of the East and West an opportunity to witness together to their disciplines of Lenten fasting and abstinence.

Read further...
Posted by Tancred at 8:55 AM No comments: