Don Siro Cisilino, Guardian of the Immemorial Mass Through Trials and Bans

(Venice) Today it is hardly imaginable any more, what the climate was,  even a few years earlier it considerably more rough. Individual priests who would held to the old Mass were those who were hard pressed by the Diocesan church leadership. One of them was the priest Don Siro Cisilino, for whom it is to be thanked, that the celebration of Holy Mass in the "Old Rite" was never broken in Venice. A short portrait should portray his way. A few months before his election as Pope the then Patriarch of Venice, Albino Cardinal Luciani, forbid in 1978, with a hard line, against the celebration of the "Old Rite" in the city and in his entire Diocese.

The famous "city on the water" had a priest, Don Siro Cisilino, despite the 1965 intervening Liturgical revisions and the following Liturgical reform a few years later, held fast to the Tridentine Rite. The priest and musicologist born in Pantianicco near Udine in Friuli, worked as a pastor in lagoon city. There he wed the beautiful, 1718 classical style overlain on the previous medieval structure of the church of St. Simeon Piccolo. The church is consecrated to the Apostles Simeon and Thaddeus. In order to distinguish it from a nearby parish church, which is consecrated to the Prophet Simeon, it is called the parish church of San Simmeone Grande and the church on the canal is called San Simeone Piccolo. The oldest evidence for both churches traces the back to the 10th century.


As with the abrupt celebration of the Mass in the vernacular on March 7th, 1965,  Don Siro did not alter his practice.  He celebrated from then on in Latin according to the Missal of 1962.  The priest had already previously foreseen a radical change with inner disquiet and great sensitivity to the various small liturgical novelties.

As with the first Sunday of Advent in 1969 according to the 1965 translated Missal of 1962 a far deep ranging attack followed and a completely new Missal was introduced, Don Siro refused it.  He did not allow himself through any inducements or threats to celebrate the New Rite.

Exodus and Patience in the Catacombs

The changing times broke on Don Siro Cisilino.  The priest had to leave his church on the Canal Grande because of his refusal.  He took advantage of the Franciscans of the city for a right of sanctuary,  in order to celebrate outside of Mass times, in the truest sense of the word, to be able to celebrate the Old Rite in peace.

As in 1976 the case of Archbishop Lefebvre and the Society of St. Pius X he founded "exploded" and the "Traditionalists" were persecuted like sectarians, the Franciscans revoked the guest friendship they offered.  Although Don Siro neither knew Archbishop Lefebvre nor had any contacts to this community, he became a victim of an over eager obedience.  He became too "hot" for the Franciscans.

The priest found a new guest friendship with the Benedictines on the island of San Giorgio near the Palace of the Doge.  In the crypt, which he was allotted by the monks, the Mass of Pius V survived in a certain way in the catacombs.  The Benedictines of San Giorgio were changed to the Novus Ordo, yet continued to celebrate in Latin and preserved the Gregorian chant.  This situation gave them understanding for the homeless priest, to whom they gave asylum. 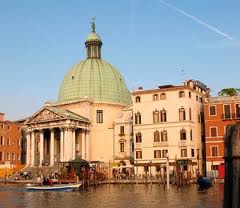 Ways of Providence and the Return to San Simeone Piccolo

By a fortunate consequence, friends of Don Siro's spoke without hesitation of divine providence, when the famous church musician Carlo Durighello, took part in the humble feast, which was held in July 1977 for the 50th Priestly Jubilee of Don Siro. Durighello had received permission from the Curia,  to use the church, closed since the time of Don Siro's forced departure, for a church music concert.  With great expense, Durighello undertook the necessary renovations.

It was the first time through  this that the church musician and the musicologist met for the first time, and it came that Durighello invited Don Siiro to return again back to his old church.  After the first Mass celebration in August of 1977, the traditional priest was installed permanently on his Mass location at the Canal Grande.  The return meant also a departure from the catacombs of San Giorgio and new visibility for the Old Rite.  Under the general climate of that time, a daring step, which Don Siro did not take lightly.  He suspected new difficulties to come.

Soon word got around, that after years in the city without an available Mass in the "Old Rite" was celebrated.  The number of the faithful, who streamed to San Simeone, was ever greater.

The peace did not last long.  Only a few months later the storm broke.  The then Patriarch of Venice, Albino Cardinal Luciani declared in a document that "the celebration of the ancient Mass in the Church of San Simeone Piccolo and in the area of the whole Diocese, is to be categorically forbidden,"  it said in a private message and without the participation of the faithful.  That was the only notification.

In the official Diocesan paper (Rivista diocesana del Patriarcato di Venezia, edition April-May 1978, P 167)  the curia renewed its proclamation:  "The Patriarch previously forbid that in San Simeone Piccolo -- as has been against the protest of the current pastor, the Vicar and other faithful in the render-vous of the movement Una Voce -- that  the so-called Mass of St. Pius X is celebrated."  At least the ban, that the Old Rite may not be celebrated in the entire Diocese any longer, had fallen away.  Don Siro had to leave San Simeone Piccolo for a second time, but was able at least to return to celebrating Holy Mass on the island of San Giorgio with the Benedictines.

Early Death of John Paul I., Saved the Celebration on Canal Grande

After the death of Pope Paul VI. the Patriarch of Venice became elected the new Pope John Paul I on the 26th of August 1978.  His early death with only a pontificate lasting 33 days was such that the Patriarchal throne as well as the Cathedra of Peter in Rome became vacant.  This double vacancy allowed that the celebration of the Old Mass in San Simeone Piccolo could quietly continue.  Don Siro celebrated Holy Mass in the Tridentine Rite till the end of 1984 in the beautiful church on the Canal Grande right across from the train station of the city.  Becoming very sick, not the least because of his hard struggles of the previous 20 years, he returned to his home in Friauli, where he died on March 4th, 1987.

Liturgical Struggles From Death and Beyond

Even in death the Liturgical peace would be refused him.  The dead priest had never celebrated the Novus Ordo a single time in his entire life.  His wish and desire was to be buried in the traditional Rite. Prepared by past experience, his friends made the Curia of Udine aware of this on many occasions.  But still the former Archbishop of Udine, Msgr Alfredo Battisti, celebrated, without hesitating to violate the last will of the departed, the New Rite and versus populum, which Don Siro had steadfastly avoided his entire life.

Don Siro had never let the thread of the celebration of the Mass in the "Old Rite" in Venice ever break. The Holy Mass in the Tridentine Rite could also continue after his departure, in San Simeone Piccolo, where there were found other priests, who followed the example of Don Siro.  In this way, the classical Rite could continue in Venice uninterruptedly till the year of 2007, as Pope Benedict XVI rehabilitated the "Mass of All Times" with the Motu Proprio "Summorum Pontificum" and called it from the catacombs, to which it had been banned.

Don Siro is the Bridge Builder till Summorum Pontifical

Paolo Zolli, early departed Professor of Romance Languages at the University of Venice and Companion described the accomplishment of Don Siro with the words:  "In the harsh times of adversity courageous men are needed, who will carry the torch on further, till God grants better times."  In the implementation of Motu Proprio,  the former Patriarch, Angelo Cardinal Scola, erected the church of San Simeone Piccolo as a personal parish in the extraordinary form of the Roman Rite, which has been entrusted to Father Konrad zu Löwenstein of the Fraternity of St. Peter.