Chile: Leftists Occupy and Desecrate a Church During Student Protests

Demonstrations against the education policy degenerate into anti-Christian vandalism.

Santiago de Chile (kath.net/ KNA) In Chile unknown masked individuals have stormed a Catholic church on the outskirts of Santiago in the course of student unrest on Thursday. Video recordings show demonstrators bringing the cross with the figure of Christ from the church and destroying it on the open road.

Chilean Interior Minister Mario Fernandez denounced the riots. Such vandalism has nothing to do with freedom of expression. The images of destruction were cause for anger and protest in the social networks. In all of Chile, thousands of students took to the streets on Thursday to protest against the education policy of the government.
Posted by Tancred at 1:33 AM 7 comments: 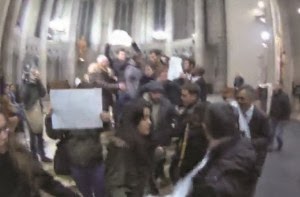