Rome’s Most Popular Church: Warning Notice About Reception of Communion

Santa Maria in Aracoeli, the youngest of the Roman churches, which was built in the basilica style. On the left is the "Fatherland altar".

(Rome) The Basilica of Santa Maria in Aracoeli on the Capitol is one of the most popular churches in Rome. In it, in a side chapel, the Santo Bambino, the baby Jesus, is worshiped. In the church, a warning board has now been attached, which is the opposite of what is said under the slogan "Communion for all".

The "Holy Child" was carved by a Franciscan in the late Middle Ages from the wood of an olive tree from the garden Gethsemani. The Franciscan order has been in charge of the church since 1250. From 1517 until the end of the 19th century, it even housed the Order's General House. The construction of the present church began shortly before.

The first church on this highest elevation on the Capitol, the former political and religious center of the city of Rome, was built in the 6th century. The church was connected to a Benedictine monastery. At that time the church was still called Santa Maria in Capitolio. The grand staircase to the church was built by the city council in the middle of the 14th century, as an exvoto for the end of the plague that raged in Europe at the time. 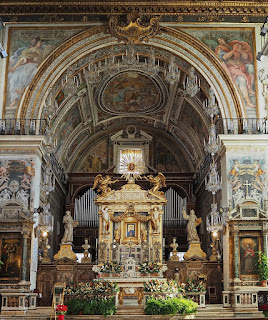 The church on the hill, today somewhat constrained by the oversized promulgation of the secular "Fatherland Altar", with which the Italian state celebrated its unification and the conquest of Rome (and also symbolically overshadowed the conquered Church, along with a new state cult), Throughout the centuries, it was the church of the Roman people - even more than St. Peter's Basilica and the other patriarchal basilicas. Here, the Romans make their pilgrimage today with their worries and requests for the baby Jesus. Here they thank with the Te Deum at the end of the year.

In 1797, the French Revolutionary troops expelled the Franciscans, robbing and destroying. The church was profaned. Already in 1799 it was restored and the brothers of St. Francis of Assisi returned. When Italy was united by force in 1870 and eliminated the Papal States, the monasteries on the Capitol, like all monasteries, were abolished. The young state turned it into a barracks.

In 1886 the monastic history of the monastery ended, which was demolished to give way to the aforementioned monument, which the Romans derisively call "the bit". Shortly before 1900, the Franciscans built a new, much smaller monastery next to it.

The baby Jesus was stolen in 1994 by unknown perpetrators. The excitement and indignation in Rome was very great - even Rome's underworld. From the prisons of the city, the imprisoned Roman
crooks appealed to the perpetrators to return the baby Jesus. It has remained lost until today. The Roman crooks then started a collection of money from the prison. With the money a faithful copy was made, which has been worshiped since then in the church. 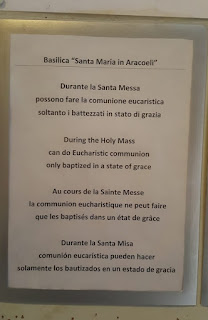 The Franciscans, whether for a concrete or preventive occasion, at the entrances to the church brought a multilingual reference reminding and admonishing the faithful and visitors of the church in Italian, English, French and Spanish:

"At the Holy Mass, only baptized persons who are in the state of grace can receive Eucharistic communion."

A reminder that also applies to some German bishops.