Orthodoxy Averse Bishop of Regensburg is Campaigning for CDF

Heretical goat is being considered for the Church's faith gardener.
-kreuz.net 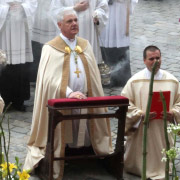 (kreuz.net, Regensburg) The Pope has to decide whom he will name to the Congregation of Doctrin and the Faith.

This is what Heresy-Bishop Gerhard Ludwig Muller (64) of Regensburg said yesterday for the German agency 'dpa'.

Msgr Muller has already had talks in Rome about his appointment to the Congregation for Doctrine and the Faith.

Disclaimer He needs the appointment for his ego


Msgr Muller is at the moment working to improve his heretic image by saying conservative things.

As far as the office goes, he's interested in:

"It would not irritate me in the sense that I needed the nomination for my own ego, but of course it is an activity that has to do a lot with my career as a theology professor.

In his wordy and long winded work "Catholic Dogmatic" he denied, among others, the Virgin birth.

Upon this it happened -- says Msgr Muller -- "not to deviate from physiological particularities in the natural process of birth (such as something like the non opening of the birth canal, the non-injury of the hymen and not experiencing the pains of birth), rather it's in the healing and saving influence of the Grace of the Savior on human nature."

The heretical work appeared in 2010 in an uncorrected third edition.

A denier of the Dogma of Transubstantiation

There he says that the body and blood of Christ are not "in reality" the material parts of the person Jesus during his lifetime, nor would it be represented by his transfigured body.

Or he believes that the Eucharist is present in that we participate in Community with Jesus Christ through eating and drinking the "bread and wine".

Msgr Muller compared Holy Communion with a small gift: "Already in the interpersonal area it may represent an approximate message of friendship between people and the receiver is to embody and demonstrate, so to speak, the emotional connection to the addressee.

Thus expressions pass like: "The natural purpose of bread and wine must be attached anthropologically.

He denies the Dogma of Transubstantiation -- the essential change in the Eucharistic substance:

He did this with scandalous praise for the Lutheran Laybishop and homosexual propagandist Johannes Friedrich.

As far as the relationship between the Church and the Protestants he said: "We define our relationship to one another no longer actually with existing differences in teaching, life and constitution of the Church, but over the commonalities, which are fundamental, are where we stand."

He openly denied the unity of the Church: "There is therefore -- strictly speaking -- not several churches together, but there are divisions and splits within the one people of God and his house."

Msgr Muller made complete fools of his audience by claiming that 'Dominus Jesus' -- the Declaration of the Congregation for the uniqueness of Christ and the Church he built in 2000 -- did not deny protestants were part of the Church.

On the contrary: The Doctrine is "far away from that", the Protestants adhere to the being of the church -- stated the distorter.


Msgr Muller will not refuse an offer to the post:

"Formally, you could probably say no, but is simply not enough to say no to the Pope' -- he joked.

The Pope said he desired a correction to the incorrectly translated German words of transubstantiation, which has yet to be carried out in his diocese today.