Luxury Apartments Instead of Churches in New York 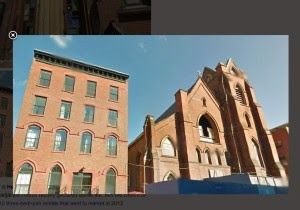 (Washington) Fewer churches, more houses. Even luxury homes. Something like this could  be  the motto of estate agents in New York. The real estate market of New York is booming. Although the eight million inhabitants, only grows to a more modest degree, about 0.2 percent each year, but the demand for housing remains strong. More and more single households and higher demand will be satisfied. So real estate speculators eagerly spy for the churches of the city. Numerous churches are risking soon to be demolished to make way for luxury condominiums.
Some are already gone. Thus the Church of Saint Vincent de Paul of Williamsburg in Brooklyn. She was sold, according to USA Today, for 13.8 million dollars. Today there is a building there with 40 apartments. Each of them can be rented at the price of 4,250-5,500 dollars a month. Another example is the Church of Mary Help of Christians in the East Village. Soon the church of Our Lady of Vilnius in Lower Manhattan at the entrance to the Holland Tunnel connecting New York and New Jersey. For them, a $13 million price was paid. In their place, a 18-storey residential building is to be built. 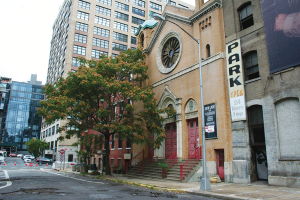 Church of Our Lady of Vilnius will soon be discontinued
In the Upper East Side, the Church of Our Lady of Peace should belong to the demolition of candidates. The Church was built in 1886 by the German-American community, and was later became the home of Italians . It is located in a historic part of the city. The church facade is a listed building. No problem for the real estate industry. The facade will be preserved behind a modern building with luxury apartments. The historic façade will bring  a special flair to the living space of future owners.
Just one kilometer away  the Church of Saint Thomas More could be demolished. It is the church which was visited by Jacqueline Kennedy Onassis. There, the memorial service for her murdered husband, US President John F. Kennedy took place.
Reason for the feverish pursuit of  churches by the real estate industry is the announcement of the Archdiocese of New York, to merge parishes and close some churches  by year end. This is due to rising maintenance costs, shortage of priests and decline of practicing believers. Archbishop Timothy Dolan, Cardinal, announced that his archdiocese will no longer spend $ 40 million to maintain the parishes that do not need it.
Text: Giuseppe Nardi
image: Vatican Insider / Curbed NY (screenshot)
Trans: Tancred vekron99@hotmail.com
Link to Katholisches...
AMDG
Posted by Tancred at 9:44 AM 7 comments:

Edit: We’ve just been informed that Cardinal Dolan is probably going to close down the Latin Mass center of Holy Innocents and the Padre Pio Shrine.  Holy Innocents is also known as the “actor’s church”.  Strange choice to base your Traditional Community, but it might help preserve it.

Maybe more thespians need to start having children and going regularly to Mass?


Among the locations being considered for closure by the committee, which is scheduled to issue its final blueprint to archbishop Cardinal Timothy Dolan in June, are the Church of St. John the Baptist and the Church of the Holy Innocents in Midtown Manhattan, according to internal documents obtained by Capital New York. Both would be consolidated into nearby St. Francis of Assisi on West 31st Street, which could take a new name.

St. John the Baptist, also on West 31st Street, is directly across from of Pennsylvania Station and a well known parish. It is run by the religious order of the Capuchin Franciscans and is home to the Saint Padre Pio Shrine, which attracts devotees to the 20th century saint. Holy Innocents on West 37th Street, the oldest building in the Fashion Center, was once known as the “actor's church.” Playwright Eugene O'Neill was baptized there in 1888. Some Masses are still celebrated there in Latin.

There’s no word as to what plans there are for St. Francis Xavier parish and its amazing outreach programs, and "loyal opposition” to the Archbishop and Catholic teaching.   At this point, the Cardinal seems enthusiastic about what’s happening there, and less so about what’s happening elsewhere, if these closures are any indication. 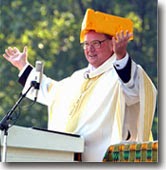 As usual, we invite those who live in NYC to comment on this.

Here he is being wildly enthusiastic about sins that cry out to heaven for vengeance…  or so it appears.

Edit:  The very expensive Archdiocesan Communications Director,  Dennis McGrath, addressed a group of people protesting today in front of St. Paul's Catheral in front of the chancery about the closing of their Church.  There were Polish flags flown and people were understandably upset.  It would be nice if they got upset when priests taught heresy.  It's actually kind of disturbinb in a way too, because the people's ire is primarily directed at a decision which affected them negatively, and that's all.   They don't care about McGrath's statement that the closing was necessitated because of demographic shifts.  But then, all we know about what they're saying is from the anti-Catholic newspaper, also.

The parish in question is a fairly conservative one, but you won't find that discussed in this local, left, anti-Catholic Star and Tribune .  You may hear Dennis McGrath insist that parishes had to be closed because of demography, but that certainly wasn't the case with St. Augustine's which operated in the black.  Perhaps this would have been a good time to close, St. Francis Cabrini with its pro-Homosexual pastor and put him on retirement?

You also won't hear that the man who managed the parish closing process, Father John Bauer, is pastor of one of the most dissident parishes in the entire Archdiocese, the Basilica of St. Mary's, which frequently in the past has featured speakers opposed to Catholic teaching, a homosexual promoting block party and even had a Rabbi speak this last Good Friday.

All of this is met with almost complete indifference on the part of the Archdiocesan Staff.  It's not even mentioned, but meanwhile, the daughters of hard working Polish immigrants and their husbands will have to go to Mass somewhere else.

They were protesting the decision by the leaders of the Archdiocese of St. Paul and Minneapolis leaders to close 21 parishes, a move the leaders say was prompted by finances and demographics.

It was the first public pushback against the closing plan, featuring almost exclusively members of the Church of the Holy Cross, a northeast Minneapolis parish that has served Polish-Americans for 125 years, including with Polish-language masses.