ROME, October 19, 2010 – The special synod for the Middle East that has been underway at the Vatican for ten days is shedding light on a segment of the Christian world in dramatic movement, in several directions and with an uncertain future.

The exodus of Christians from those lands is an important part of this movement. But it is not a new phenomenon. During the first half of the twentieth century, the extermination and expulsion from Turkey of the Armenians, and then the Greeks, were of colossal proportions. Today the exodus continues from several places, and in different degrees. The fact is that in comparison with the twelve million faithful of the ancient Eastern Churches who today live between Egypt and Iran, there are now about seven million living elsewhere.

For many decades there have been more Armenians in the diaspora than in their native land. The Maronite Lebanese have dioceses for their emigrants in the United States, Canada, Mexico, Brazil, Argentina, Australia. The Syriac Orthodox have an eparchy in Sweden. The Iraqis have created a "Chaldean Town" in the city of Detroit. Most of the Christian emigrants from Bethlehem are going to Chile.

Email ThisBlogThis!Share to TwitterShare to FacebookShare to Pinterest
Labels: Chiesa

The Other Curia of Pope Benedict XVI.

ROME, September 27, 2010 – The imminent promotion of Salesian Fr. Massimo Palombella as the new director of the Sistine Chapel choir is the latest in a series of appointments that have changed the visible face of the Vatican curia, in the five plus years of Joseph Ratzinger's pontificate.

There are, in fact, two curias around the pope. There's the one that the general public hardly sees, made up of the classical dicasteries: the secretariat of state, the congregations, the pontifical councils. The final decisions of this curia are made public, but little is seen or known of the toil that precedes these decisions.

But there is also a curia that, by its nature, is more outwardly projected and visible. It is that of the museums, the library, culture, the pontifical choir, the media. Much of the operation of this other curia is done in view of the general public.

Over half a century, the pope's ambassadors in the world have doubled. Bilateral diplomatic relations have tripled. Failing to answer the summons are China, Saudi Arabia, and a few other states. The double game of Vietnam: while it is negotiating with the Vatican, it is assailing Catholics 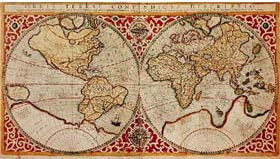 All the Evidence of God: An Inquiry

ROME, December 13, 2009 – The objective was to "dispel the shadow that makes access to God precarious and frightening for the man of our time."

Benedict XVI said so in the message on December 10 that inaugurated the international event in Rome on "God today. With him or without him, that changes everything," conceived and organized by the committee for the cultural project of the Italian Church, headed by Cardinal Camillo Ruini.

Two days later, at the end of the event, Ruini was beaming. The topic was tough, and listening a challenge, with philosophers and scientists using arduous language. And yet the hall was always full, in an extremely attentive silence. 2500 people went to the grand auditorium on the Via della Conciliazione, a short walk from Saint Peter's Square, to hear about God. Much of the audience was new, and young. Visibly proud of the richness and seriousness of the things said, in a disoriented world that is thirsty for precisely this.

This audience wanted to hear about God, and nothing else. But not, of course, about disputes within the Church, on one and the other side of the Tiber. The prophets of doom who had predicted (and deep down hoped for) the failure of the event, and with it a farewell to that "phoenix" which, according to them, the cultural project was, together with the definitive retirement of its conceptualizer, Ruini, were silenced by the results. The cardinal has already announced that a second event will soon follow this first one, also "on substantial issues, hard, not easy, not in fashion."

Read further...
Posted by Tancred at 2:32 PM No comments: