Mellow Out Subcaths, Free Speech is a Democratic Virtue

Update:  Mark Shea has apologized for slandering Michael Voris, who was simply reporting the news and not making any negative statements about the Holy Father at all.  Well! 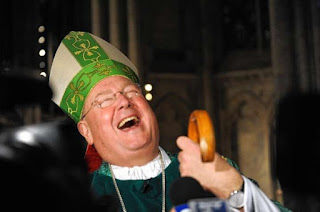 Edit:  after reading a blog post recently urging a non-descript group of intransigents, integralists, seminarians, mothers of five at home and people of the remnant, to “calm down”,  I thought it would be interesting to address the subject of public browbeating typical of certain people who attempt to vilify that group known as “Traditionalists”,  loosely described as a group of individuals who embrace the rites and doctrines of the Catholic Church as they have been practiced throughout the ages.  First off, assuming that most of the people are firm advocates of the Second Vatican Council, we should perhaps step back from vilifying a group of people and consider the importance of free expression, religious freedom of speech and  assume that we're supposed to be adults capable of forming our own judgments, even if they are incorrect.  But hey, it's a lot easier to kick a dog we think won't bite!

Part of the problem with these rushes to judgment, even if we're criticizing people we think no one regards as human beings, is that the individuality of each one is forgotten.  This is important, for there are almost as many reactions to this papal election as there are different members of the alleged "trad" group being vilified.  The responses range from palpable anger, despair, grief, resignation, cautious optimism, joy, legitimate concern,  to outright enthusiasm for this Pope.  Of course, it also helps that bloggers are so vague in their accusations, this enables many others, even self-identified traditionalists who proceed to beat themselves up with recriminations, can join in with their own particular image of the fire breathing, unfriendly, mean spirited traditionalist that they've learned to despise.

Ultimately, this kind of attempt at public shaming has the intention, whether expressed or not, of silencing legitimate criticism.  You're kicking the barking dog, or even giving him sleeping pills so a thief can get in and out undetected with the goods.

This sort of thing brings to mind a certain kind of cliquey blogger, but one blogger in particular, some blogs are more passive in their appraisal of traditionalists, but there are other blogs who shrug off not only any pretense of restraint, factuality or a love for persons, but they go right for good old fashioned slander, like Mark Shea does.

But in addressing this issue of individuals and groups, let's not assume that the people offended don't have a legitimate point to make.  Let's not blame the victim of bad behavior for calling out as so many have before only to suffer this:


And which of you, if he ask his father bread, will he give him a stone? or a fish, will he for a fish give him a serpent?

Indeed, rather than blaming those who are suffering and recognize the familiar signs of the things which have scandalized them, why not blame the agents of such crimes?   Is there really anything wrong with having a "questioning faith" if your name isn't Hans Kung, Roger Cardinal Mahony or Sister Joan Chittister?

Just to point it out, most people in the world are deliriously happy about the new pontiff, but in some areas it seems that he has profoundly distressed a section of Catholic Church who has made extensive use of the Pope's opening up of the Mass of All Ages to the entire world with his Motu Proprio, Summorum Pontificum in 2007 in Argentina.  There have been numerous responses to Rorate Caeli's expose on the situation in Buenos Aires, most of them are as hysterical and uncharitable as the post accusing intransigents of doing.

In fact, according to Rorate Coeli's journalist, the Holy Father did not implement the legislation in his See and even went to extents to suppress it by refusing to allow his priests to say it.  This goes against what else we've heard from Giuseppi Nardi at Katholisches, that the Institute of the Good Shepherd has a Mass location in his See, but we have been unable to confirm that at present.

But then there are other "trads" like Father Gruner, who believe that we are on the eve of a Fatima Papacy.  Father Gruner has been in contact with the Holy Father in the past and is beside himself.

Of course, focusing on the alleged problem of people with legitimate or perhaps, ill-formed and misplaced grievances in good will, we should be considering where the true problems lie instead:
Posted by Tancred at 11:16 AM 14 comments:

Edit: over the past few days, a Catholic priest of the Archdiocese of Newark, who is a Vice President of Missions for the organization Human Life International, founded by Father Paul Marx OSB, has been taking a familiar internet apostle, Mark Shea, to task for engaging in character assassination, legitimizing homosexual attitudes and  being deceitful.  Now it seems that some professional lay Catholics have gotten Church authorities involved.

What's also very bad is that some of his supporters are accusing Father West of slandering Mark Shea.  Of course, they refuse to give proof of this. Elizabeth Scalia, Steven D. Greydanus, and George Lower have persistently and maliciously, accused Father Peter West of Human Life International of slandering Mark Shea. I've asked all of them repeatedly for proof indicating that, and they have steadfastly refused to answer and instead make personal attackes.

Any normal Catholic employer would be eager to deal with such insulting behavior immediately. Justice might best be served if all of them were summarily sent to pack up their desks and go home with a little severance pay.

When the Communications Director asked Father West and Mark Shea to cease their public disputation, here's what Mark Shea wrote disingenuously in return:

"Thank you, Fr. Peter, for breaking off your campaign of defamation, rash judgment and calumny against me. I hope you will consider my request that you go back and restore my good name with the readers you have poisoned against me instead of merely leaving what you have said and suggested about me to linger in the air. I bear you no ill will and am still reeling from this unwarranted and unprovoked attack."


This is statement from the Archdiocesan Communications Director, asking Father Peter West to cease his statements and handle his disagreement with Mark Shea privately:

FatherPeter West and Mark Shea, I respectfully request that you both make a sincere attempt to discuss your differences one to one, verbally or in writing, rather than continue as you have been. Judging from the communications our office is receiving, this contretemps is causing no little disquiet among a number of the faithful. At the least, please endeavour to communicate publicly in measured tones on this matter so as to avoid causing unnecessary confusion and distress. I thank you for you consideration.
Best,
Mike Donohue
Director of Communications
Office of Bishop Paul S. Loverde
Diocese of Arlington
The person the Communications Director should be talking to privately and not publicly on Facebook, is Mr. Shea, maybe a meeting involving a pink slip?

We'd also like to ask if Mark Shea plans on apologizing to Father Frank Pavone for slandering him?