45 New Entrants for the Fraternity of Saint Peter

Young men in black cassock: seminarians and leaders of the seminary the Society of Saint Peter in Wigratzbad.

(Wigratzbad) After withdrawing on retreat days, 30 applicants have entered the International Seminary of the Society of Saint Peter (FSSP) in Wigratzbad. In total, the Society is registering 45 new entrants for the academic year 2019/2020.

Founded in 1988, the Priestly Society of Tradition has two international seminaries: the St. Peter Seminary in Wigratzbad and the Theological Seminary of Our Lady of Guadalupe in Denton, USA. The training is possible in German, French and English.

The French-speaking and German-speaking candidates are trained in the Swabian town of Wigratzbad, near Lake Constance. The English speaking is in Texas in the USA.

The establishment of a Spanish-language seminary is being worked toward.

In the past year 24 new entrants had been registered in Wigratzbad. This year, new entrants for German-speaking applicants have doubled.

17 new entrants have taken up the training in French, 13 in German and 15 in English.

On October 19, 23 seminarians of the second year of study received tonsure and vestments, 15 in Wigratzbad and eight in the USA.

Buda eliberata, thanksgiving on the occasion of the liberation of the Hungarian capital from Ottoman rule 333 years ago. In the background the equestrian statue of St. Stephen the First at the Fisherman's Bastion.

Last week, on the day of the triumph, the Savior of Hungary, Blessed Pope Innocent XI, was born. At his monument in the castle district of the Hungarian capital, a wreath was laid down and in the Matthias Church, there, a Mass if thanksgiving was said. The monument to the Pope was built on the occasion of the 250th anniversary in gratitude for the liberation from the Turk on Andreas-Hess-Platz.


"Beyond military success, the reconquest of Buda has been an important milestone in the survival of our nation. Through this reminder, we want to emphasize that we, in the future, intend to continue to live our traditions and values ​​and to protect them at all times. This is our shared responsibility. "

These words were spoken by Alexandra Szalay-Bobrovniczky, deputy mayor of Budapest. In her speech she also referred to Bl. Innocent XI, who, in addition to the renewal of religious life of the Church, regarded the expulsion of the Muslim conquerors from Europe as his main task. For this purpose he used all his diplomatic powers and all his moral authority and organized a Europe-wide crusade.

Alexandra Szalay-Bobrovniczky in front of the monument of Pope Innocent XI. 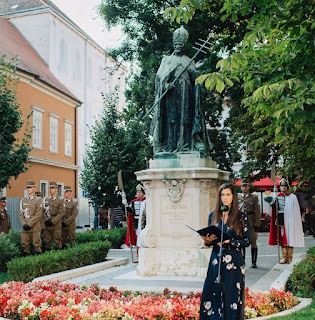 Budapest Sr. Mayor in front of the Monument to Pope Innocent XI.

By the termination of the one and a half centuries of occupation, he earned himself immense merit. That's why he rightly deserves the title of "Savior of Hungary," as the Senior Mayor emphasized.

In his solemn speech, Mátyás Kéthelyi, President of the Actio Christiana and organizer of the memorial service, spoke of the importance of faith and mission as well as strength and unity. As he said, the liberators of Buda could give an example to today's Christians in these matters.

For if they had not had deep faith and consequent missionary awareness and had not overcome the division that sundered Europe at that time, they would not have been able to drive out the pagans who would still be in Budapest today.

At that time, Christians did not talk about dialogue. They knew that one could not oppose the heathen from the comfortable armchair, Kéthelyi added. He emphasized that at that time it was not simply a

Hungarian-Turkish war. It was a religious war, a fight against Islam. Therefore, beyond the triumphant victory over the conquerors, we must first of all be grateful to God and to the Blessed Virgin Mary, who have helped the Christian armies to victory, according to the President of Actio Christiana.

Mátyás Kéthelyi, the President  of Actio Christiana, at his commemorative speech

After the wreath-laying  a Pontifical High Mass of thanksgiving was sung in the traditional Rite, which followed in the spirit of that time and the model after the victory a procession of thanks for the Church.

Who is the Actio Christiana?

Actio Christiana is a Christian NGO whose goal is the revival and spread of Hungarian and Central European religious and Christian traditions and folk traditions.

These include on Palm Sunday, the revival a re-enactment of Jesus' entry into Jerusalem on the back of a donkey; the beer blessing on Florianitag in May; the memorial service described here in September in the castle district of Buda; the Gift of St. Martin parade with lanterns in November and the St. Nicholas parade in December, mainly in the city center of Budapest.

These traditions were not allowed during Communist rule for more than 40 years. Their revival is, therefore, possible only step by step. 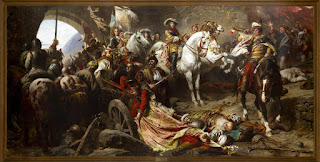 The importance of reconquest

Hungary was in constant conflict with the expanding Ottoman Empire since the second half of the 14th century. In 1354, the Ottomans occupied the first bridgehead on European soil. From then on,
Christian Europe, which they tried to conquer and subjugate, pressed against it.


However, in 1526, at the Battle of Mohács, the medieval kingdom of Hungary collapsed under the overwhelming weight of the Ottoman army. The Turks invaded the capital Buda in the same year, but left the city again. The center of the country came only in 1541, completely under Turkish rule, under which it would remain for the next 145 years.

The one and a half centuries of occupation by the Ottomans tore Hungary to pieces. The ongoing wars devastated the greater part of the country. The Muslim conquerors chained hundreds of thousands of Christians and enslaved them. Hundreds of thousands more died in a heroic death in battle or fell victim to the enemy's arson.

This depleted Hungary would not have been able to free itself from the shackles of the Ottoman Empire by itself. A European union was necessary.

Pontifical High Mass in thanksgiving for the liberation 333 years ago

Blessed Pope Innocent XI. It was a great effort to bring about this union in a Europe that had been
tormented and divided decades before by religious wars.


The strong belief of our ancestors and their resulting courageous attitude finally led to the victory of the Christian armies on 2 September 1686 at Buda. This triumph made it possible for Hungary, in the following ten years, to be completely liberated and become the protective bastion of Christendom.

As Blessed Innocent XI. received the news of the victory, he ordained the day of liberation in the Universal Church as the memorial day of St. King Stephen.

The pastor of the Christian armies, Blessed Marco d'Aviano, a Capuchin, celebrated Holy Mass on the day of victory that was followed by a procession with the Blessed Sacrament and the "Gunpowder Madonna" found under the rubble.

Since then, it is a tradition in Buda to celebrate the liberation from Mohamedan rule.