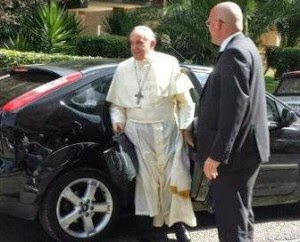 (Caserta / Vatican) The meeting with Pastor Giovanni Traettino was announced as a "private visit" by the Vatican. Subsequently, the Holy See doubled the visit so as not to  snub the Catholics of Caserta.   The visit to his "friend" Traettino was conceived as  an international meeting with leading evangelicals and Pentecostals from around the world. More than 300 selected guests had been invited by Traettino to Caserta. The presence from the USA was particularly strong.  Not present was the Celtic-Anglican Bishop Tony Palmer, who suffered a fatal motorcycle a week previously.  Palmer was a significant architect of the "private meeting" in Caserta.
Meanwhile, the Holy See published the text of the speech, which the Pope gave  before the assembled evangelicals. It in any case is becoming difficult to distinguish between official and private acts of the Pope, as well as between the papal Magisterium and private statements. This is an unusual duality, which Pope Francis introduced, being discussed, which of the two parts is the authentic one.

"Private Conversation" or Part of the Magisterium?

With the publication of the text of the Vatican obviously wants to counteract speculation about what the Pope actually said and what he did not. Such speculation has already repeatedly triggered the papal crisis line, as well as the no less numerous non-protocol-related audiences granted by the Argentine Pope along side the official, and whose contents are only reported from the side of the visitors. Without mentioning  the controversial interviews with the atheists Eugenio Scalfari.
In fact, KNA and KAP published speech excerpts  yesterday    that exceeded in their accentuation from what the Pope actually said (see separate report Pope Asks Pentecostals for Forgiveness: "Catholics who were possessed by the devil" ) .
The official text confirmed that Pope Francis reduces all heretical schisms within Christianity on envy and jealousy caused by the devil. Martin Luther as a jealous envious? The Pope directed no blame and weighed them all equally.

Schisms in the Church's History Reducible to Envy and Jealousy?

According to the newly published text of the Holy See, the Pope said, among other things, (translation Zenit):

When one walks in God’s presence, there is this fraternity. When, instead, we are still, when we look too much to one another, there is another way … which is bad, bad! -- the way of gossip. And we begin to say, “but you, don’t you know?” “No, no, I’m not for you. I’m for this and that …” “I am for Paul,” “I am for Appollos,” “I am for Peter.” And so we begin, and so from the first moment division began in the Church. And it isn’t the Holy Spirit who creates division! He does something that is quite similar to it, but not division. It’s not the Lord Jesus who creates division! He who creates division is in fact the Envious One, the king of envy, the father of envy: the sower of darnel, Satan. He interferes in communities and creates divisions, always! From the first moment, from the first moment of Christianity, this temptation was in the Christian community. “I belong to this one,” I belong to that one.” “No! I am the Church, you are a sect.” And so the one who wins over us is him, the father of division – not the Lord Jesus who prayed for unity (John 17(), he prayed!

On this path we have very often done the same thing as Joseph’s brothers, when jealousy and envy have divided us. Those who arrived first wanted to kill their brother – Ruben succeeded in saving him – and then sold him. Our brother John also spoke of this sad story. That sad story in which the Gospel was lived by some as a truth who did not realize that behind this attitude there were ugly things, things that were not of the Lord, a terrible temptation of division. That sad story, in which the same thing was done that Joseph’s brothers did: denunciation, the laws of these people: “it goes against the purity of the race …” And these laws were sanctioned by the baptized! Some of those who made these laws and some of those who persecuted, denounced their Pentecostal brothers because they were “enthusiasts,” almost “madmen “ who ruined the race, some were Catholics … I am the Pastor of Catholics: I ask forgiveness for this! I ask forgiveness or those Catholic brothers and sisters who did not understand and who were tempted by the devil and did the same thing that Joseph’s brothers did. I ask the Lord to He give us the grace to admit and forgive … Thank you![...]