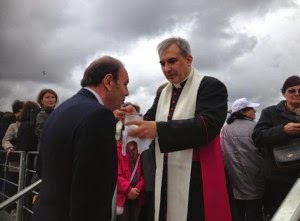 (Rome) The world of courtiers and their privileges, is a recent and a front row seat for the Holy Mass on the roof of the Vatican overlooking St. Peter's Basilica. The strange Agape for 18,000 euros with Holy Mass above the rooftops of Rome has been organized by the enterprising Francesca Chaouqui.  Monsignor Vallejo Balda gave out Holy Communion - in a plastic cup. These are two names in the Vatican, which have already been noticed.
On April 27, hundreds of thousands of believers from all over the world came to Rome. Many thousands had to sleep outdoors to attend and participate in the canonization of Pope John Paul II and Pope John XXIII.. The large crowd of Catholics pushed  to St. Peter's Square and the surrounding streets. Such  efforts seemed  unreasonable to others. They were offered an exclusive opportunity to attend the papal Mass and the double canonization.The enterprising Francesca Chaouqui organized an exclusive front row seat for a select audience on the roof of a building that is owned by the Vatican. There were 150 guests given a place  in the "front row" and an especially reasonable distance from the common people. For the 18,000-euro canonization party panoramic views of St. Peter's Square and Basilica which were otherwise unattainable were  offered, all kneeling and without jostling and with an exquisite standing buffet by the renowned Roman Catering Services .

18,000 Euro Box Seats for the Canonization

The distribution of consecrated Hosts from plastic cups, which happened already   last year during the World Youth Day in Rio de Janeiro. The undignified handling of the body of Christ have happened already in the Vatican, when the courtiers dance.
An illustrious group gathered on the roofs of Rome. Among the 150 guests were the well-known television presenter and author Bruno Vespa, Marco Carrai, the right hand of Italy's new left-wing Democratic Prime Minister of Matteo Renzi, Maria Latella a close associate of Renzi's and Ernst von Freyberg, President of the Vatican bank IOR . The cost of the roof party, after all, was 18,000 euros,  was undertaken by over two sponsors, a health insurance  company for employees and an oil company.
Guests were brought Holy Communion up on the roof. That was taken care of by none other than Lucio Angel Vallejo Balda, secretary of the Prefecture for the Economic Affairs of the Holy See and a member of the Pontifical Special Commission for the Reform of the Economic and Financial Affairs of the Holy See (COSEA).

The COSEA had been established in July 2013 by Pope Francis, is directly responsible to the pope, and equipped with far-reaching powers. The appointment of the eight Commissioners was the reason for some guesswork. In the papal statement establishing the Commission it states that the members of the new Commission have access "to all documents, data and information," the Vatican Bank IOR, all balance sheets, of any authority and establishment of the Vatican and the entire movable and immovable property of the Holy See have worldwide. Each official secrecy has been lifted for the Commission.
Many were most puzzled about the appointment of Francesca Chaouqui. Chaouqui is neither an auditor nor a tax consultant, which would qualify her for the task of the Commission. Rather, she  is much more responsible for PR  for the international management consultant Ernst & Young and is therefore "in short, a lobbyist," says Vatican expert Sandro Magister (see separate reports, New Papal Commissioner and The Confessions of Francesca Chaouqui ).
The still existing Commission is composed of seven laymen and clerics. One cleric in the Commission, Msgr Vallejo Balda,  was handing out Holy Communion at the rooftop party. The Spanish priest approached Pope Francis soon after his election in the guest house of Santa Marta  and then made a ​​quick career. From him the idea was to set up a Special Commission and he gave the Pope the selection of Commissioners, whom Francis then appointed. The collaboration between Msgr Vallejo Balda and Francesca Chaouqui certainly seems variously shown by  the roof party.

"Mixture of the Secular and the Religious Stuff"

Meanwhile, the matter was has become known and "the Pope was outraged," wrote the weekly magazine L'Espresso , when he learned of the "Roof Story." Cardinal Giuseppe Versaldi, the Prefect for the Economic Affairs of the Holy See told the TV station Italia 1 : "I can not announce what the Pope has said. He has been informed and I can only say that he is not happy, to use a euphemism. But I can assure you that such episodes will not recur. "
Cardinal Versaldi claimed to have known nothing of the rooftop party. "Like many others, I too am surprised by this blend of the secular and the religious stuff." The Cardinal is, piquant detail not included,  the direct superior of Msgr Vallejo Balda. He is quoted by L'Espresso quoted as saying: "I'm not talking about the roof. Thank God we have other problems."
Chaouqui reacted in the usual way: All information would only be disseminated in order to "discredit" in the eyes of the Pope.
Text: Giuseppe Nardi
image: Infocatolica
Trans: Tancred vekron99@hotmail.com
Katholisches...
AMGD
Posted by Tancred at 5:16 AM 21 comments: