(Krakow) Opinions and allegations that Pope John Paul II has reacted too slowly to the sexual abuse of minors by some clerics, "are biased and contradict the historical facts". Stanislaw Cardinal Dziwisz, Archbishop Emeritus of Krakow, rejected this claim in a public statement. Cardinal Dziwisz served as personal secretary to Karol Wojtyla for almost 40 years.

Yesterday, the statement "John Paul II on sexual abuse in the Church" by Cardinal Dziwisz was published on the website of the Polish Episcopal Conference in Polish and English.

It is not true, according to the cardinal, that John Paul II "wanted to tolerate the crime of sexual abuse of minors in the Church". The truth is that the Pope was rather "shocked" and "fought against it".

Dziwisz was ordained priest in 1963 by Karol Wojtyla. From 1966 he became his secretary as Archbishop of Krakow. When Cardinal Wojtyla was elected to the pope in 1978, Dziwisz went to Rome as his personal secretary. Benedict XVI. appointed him Archbishop of Krakow after the death of the Polish Pope and created him Cardinal.

Dziwisz recalls, inter alia, the indulgences given by John Paul II to the United States of America (1994) and the Church of Ireland (1996), which approved a policy known as "zero tolerance". The former personal secretary of this Pope also refers to the document Sacramentorum sanctitatis tutela for the Protection of the Sacraments, which was published in May 2001 on the initiative of John Paul II. It proclaimed new norms "on the more serious crimes" (de delictis gravioribus), which took the defense and fight against such crimes to a new level

John Paul II had observed how the local churches responded, in whose responsibility cases occurred. This was especially true of the United States, where the problem occurred for the first time massively. "If necessary, he helped them, often on their own initiative," or "at the request of the local episcopate." In the 1980s he reacted to the crisis in the US church.

"The pope first observed the activities of the episcopate of the United States, and when he came to the conclusion that new instruments were needed to combat these crimes, he gave the church superiors new powers. For the bishops, this was a clear indication of which direction to fight. "
When it became clear that the local episcopates and religious leaders still could not cope with the problem and that the crisis spread to other countries, John Paul II recognized that the problem "not only concerns the Anglo-Saxon world, but has a global character ".

It is known that a new wave of revelations came in the United States in 2002, caused by publications known as "Spotlight". On the other hand, as the cardinal states, it is scarcely known that John Paul II published the document Sacramentorum sanctitatis tutela (for the protection of the sanctity of the sacraments) in May 2001 just one year before these events. "We know the groundbreaking significance of this law," said the emeritus Archbishop of Krakow. In doing so, the Pope responded to the apparent difficulties of the competent episcopates to respond appropriately to the problem.

"All sexual crimes committed by clerics against minors have thus been reserved for the jurisdiction of the Apostolic See."
"He also pledged every bishop and religious leader to report all these crimes to the Congregation of the Faith, if their probabilities were confirmed in a preliminary ruling."
The rest continued under the control of the Apostolic Tribunal.

The cardinal states that the main problem of sexual abuse of minors in the Church had already reached its peak before the pontificate of John Paul II. On the other hand, the Polish pope began to act as soon as he became aware of the problem. The demonstrable decline in crime since then proved the effectiveness of the measures, although the problem could not be completely eradicated.

"This analysis serves as a guide for anyone involved in the fight against the crime of sexual abuse of minors by clergy. It helps diagnose the crisis and shows the way out. "
At the end of his statement, Cardinal Dziwisz also commented on the case of Marcial Maciel Degollado, founder of the Legionaries of Christ.

"It is said that John Paul II has covered up his criminal activities. But the facts say otherwise. I would just like to remind you that the Congregation for the Doctrine of the Faith began in December 2004, during the pontificate of John Paul II, with the investigation into the allegations against Maciel Degollado. Msgr. Charles Scicluna, at that time promoter iustitiae and now Archbishop, was sent to Mexico and the United States with another lawyer to carry out the necessary activities in this matter. The decision to initiate these investigations could only be made with the knowledge and consent of John Paul II. The investigations were not interrupted in the time of the Sedisvakanz after the death of John Paul II and could therefore by a judgment at the beginning of the pontificate of Benedict XVI. be completed."
Text: Giuseppe Nardi
Image: episkopat.pl (screenshot)
Posted by Tancred at 10:57 AM 4 comments: 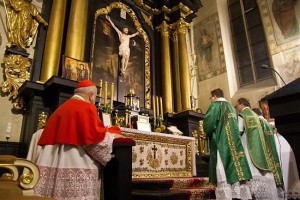 (Krakow) Cardinal Stanislaw Dziwisz, John Paul II's secretary for many years and since 2005, the Archbishop of the Old Polish capital of Krakow, was present on November 11th at a Holy Mass in the extraordinary form of the Roman Rite.  The Sacrifice of the Mass in Krakow's Cross Church was celebrated by Father Wojciech Grygiel, the Superior of the Society of St. Peter in Poland.  The event was the tenth anniversary since the Polish Archdiocese regularly celebrated the Mass in the Tridentine Rite by the Society of St. Peter.

After the celebration, Cardinal Dziwisz expressed his gratitude:  "This Rite is very close to me.  It reminds me of my youth and the beginning of my priesthood.  It had moved me very much, to be present at this Mass in the extraordinary form of the Roman Rite."

The Cardinal turend to the faithful, for the pastoral care of the Society of St. Peter to bring the Old Rite to expression and thanked them for the beauty of the celebration, to which he addressed not only the older people, who still recognized it from their youth, but not least the young people and students and he recalled that the Roman Right has two forms.

Link katholisches...
Posted by Tancred at 1:59 AM 2 comments: