[Orientale Lumen] May 31, 2017, at 18:30 after a serious illness His Beatitude Lubomyr (Husar), Archbishop Emeritus of the Ukrainian Greek Catholic Church Church died at the age of 85.
January 26, 2001 - February 10, 2011 he served as a Major Archbishop of the Ukrainian Greek Catholic Church.
Born in Lviv, Ukraine, on February 26, 1933, Lubomyr Husar fled from Ukraine with his parents in 1944, ahead of the advancing Soviet army. He spent the early post-World War II years among Ukrainian refugees in a displaced persons camp near Salzburg, Austria. In 1949, he emigrated with his family to the United States of America.
http://orientale-lumen.blogspot.it/2017/05/cardinal-husar-at-ukrainian-cathedral.html?m=1
AMDG
Posted by Tancred at 10:50 AM 24 comments: 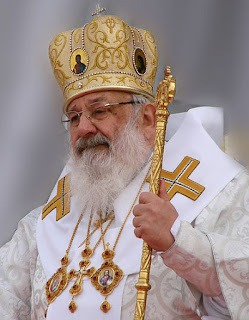