Update: The Franciscan University of Steubenville has assured LifeSiteNews that Rebecca Bratten Weiss is no longer teaching at the university.
Update 2, 5:45 PM Eastern: Franciscan University's Vice President for Academic Affairs, Dr. Daniel Kempton, sent a statement that is reproduced in full at the bottom of the article.
September 14, 2017 (LifeSiteNews) – One of the greatest threats to the prolife movement in the past 40 years has been the “Seamless Garment.” It’s a strategy and a slogan aimed at dissolving prolife sentiment like a pinch of salt in a vast swimming pool of almost unrelated issues. The heart of the life issue is simple: Should the government let individuals take human lives in pursuit of their sexual freedom? That’s what abortion is. It was foisted on America by unelected judges, and dangled out of the reach of citizens and voters. So laymen rose up, with a little assistance from clergy, and chose to fight. In much the same way, 150 years ago, Christians looked at the unjust laws permitting slavery, and formed the abolitionist movement.
And today as in 1830, many chose not to fight. They were too addicted to a cozy relationship with liberal politicians, who promised to take the burden of the corporal works of mercy away from Christians—handing them over to the government and the taxpayer. So they wouldn’t do the obvious thing—and reject those politicians. Instead they developed the elaborate, tortured rationalization that we call the Seamless Garment. As Jason Jones wrote at LifeSiteNews in 2015:

https://www.lifesitenews.com/opinion/the-seamless-garment-at-steubenville
AMDG
Posted by Tancred at 6:53 AM 17 comments:


Editor: there are a number of people comparing Father Corapi to Cardinal Bernardin. Is it a simple case of people who defend Fr. Corapi are Catholic and people who attack him are probably not, while people who defend Cardinal Bernardin are probably homosexuals? Maybe. It's difficult to think of two men who are more different. Yes, they are both Homo sapiens who are priests and one of them is actually Catholic, but that's where any similarity ends. Cardinal Bernardin, while he was alive, maintained many controversial positions in terms of theology, liturgy and while acting as a pastor. The late Father Fiore maintains that the Cardinal was an active and predatory homosexual and the man who accused the Cardinal of abusing him, Mr. Cook, never retracted his statement about being one of the Cardinal's victims, even after receiving a chalice and a large cash settlement. [From Matt Abbott's Column]

Another strange event pointing to the Cardinal's unsavory character occurred when one of his flock was murdered. A choir director named Frank Pellegirini, whose girlfriend maintains, was in a homosexual relationship with a man whom she says belonged to the "Chicago Boy's Club":

One of the puzzling mysteries surrounding the murder involved Cardinal Bernardin. According to the police who were present at the crime scene, shortly after Pellegrini's body was discovered, Cardinal Bernardin arrived at the murdered man's home to quiz the officers about the killing. The cardinal told police that he did not know the murdered man. This raises the obvious question of how he learned of the killing so quickly and of what special interest was Pellegrini to him since he did not know the victim. The Pellegrini case was reopened in the early 1990s, but to date, the crime remains unsolved and Father Greeley remains silent ...

Strange that people are still attempting to clean the reputation of this evil individual. We've often found it strange that his truly great crimes, those of heresy and the fruits thereof are seldom pointed out. Unfortunately, people don't challenge his repute on his statements regarding biblical inerancy, when he claimed that the Gospel of John could no longer be taken as definitive teaching with respect to the Jews, but never mind.  It's also clear that he wasn't on board with respect to the theory of clerical chastity, even if he seems to have lacked care for it in practice. In any event, it's a little hard to understand how a man who had the "Windy City Gay Men's Chorus" sing at his funeral while Freemasons acted as pallbearers, can inspire a defense of the man's catholicity, but there it is. How sad that the Church is run by men of this stripe.

Of course, there are people out there who are still defending Father Maciel of the Legion of Christ, who had problems of his own with respect to orthodoxy.

It says a lot about a person, whom they defend and why. One tends to think that those who defend Cardinal Bernardin are like-minded when it comes to the sin that cries out to heaven for vengeance and are, appearances notwithstanding, ecclesiastical dissidents.
Posted by Tancred at 7:06 AM 4 comments: 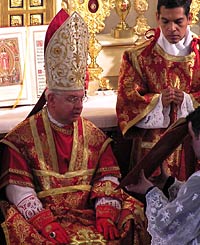 We heard from Ray Marshal that Bill Donahue is tickled pink and gives his hearty endorsement, but we still can't forget that he cheered on Jesuitical homosexual promoters, earlier this year.  Baroque chasubles are fashionable this year, but cheese head gear was fashionable at another time. 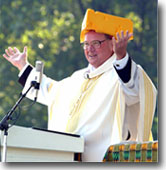 Photo: from, here with biography, what a Bishop should be wearing.
Posted by Tancred at 9:56 AM 4 comments: