Neo-Cardinal: "We Must Fight Capitalism, As We Fought Communism." 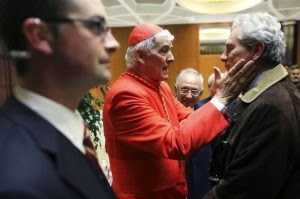 (Rome) The  Vatican expert, Giacomo Galeazzi   conducted an interview with the previously little-known Archbishop of Ancona, Msgr. Edoardo Menichelli, whom Pope Francis has made a cardinal this past Saturday. The interview was published by  Vatican Insider. Cardinal Menichelli is considered a "veteran of the Progressives" (Huffington Post).He was for many years the personal secretary of Cardinal Achille Silvestrini, a "herald of Ostpolitik" (Huffington Post). Now is following the critique of capitalism which coincides with papal statements and the reception of Alexis Tsipras by Pope Francis.

"Rewarded" for "Intervention for the Least"

As the  Italian weekly magazine Famiglia Cristiana, which lists in the same direction, wrote, Pope Francis wanted to "reward"  the elevation to cardinal  for those who show "commitment to the least" in a special way. Who is meant by the "least"? Menichelli is 75 and has already submitted his resignation. For which services he was rewarded left some observers to employ some guesswork. The hint maybe have even been provided by the Pope himself: Francis had appointed  Menichelli  personally at the Synod of Bishops Synod in October 2014. There, the Archbishop,   who took part in the sometimes heated debate, put in the word to give communion to "remarried" divorcees  and for the aberrosexuals. Four months later, he is a Cardinal and papal elector.
Also, toward the faithful of the traditional rite,  the Archbishop of Ancona is considered "liberal".  Since all the other bishops of that brand  have disallowed the celebration in the Roman Rite,  he has  granted it generous hospitality.

The responses from the interviews are similar to those of professional politicians in the back benches, making it difficult to attempt a substantive classification. Or is it superfluous because it remains unclear whether the baggage handler  thinks so or only repeats what the superiors want to hear. So the assembled slogans seem urgently meant for certain ears, perhaps the papal ears. Francis had received last October 28,  the Greek leftist Alexis Tsipras in the Vatican and  thus conveyed a "higher consecration."  The signal was not for the tiny crowd of Greek Catholics, but a political direction in Europe and worldwide. Tsipras is now prime minister in the country of the Hellenes.
What aggravates the crisis?
If the money is at the center, the person loses importance and society becomes a desert of values. Society reduced to the mere finance kills and the damage is visible for all to see. The politicians should remember the people and not their parties. It requires solidarity and sobriety: a policy of work for all. One must start again, restore the dignity of the person and eliminate injustices in the last.
More involvement in the social?
The social dimension is part of faith. In "Evangelii gaudium" Francis warns against the ideologies that defend an absolute autonomy of markets and financial speculation. Already Benedict XVI. called for a political institution which returns the financial and monetary system to function, granting credit to the workers, families, businesses and local communities.
What more can the church do?
Charity must guide every action to rush to the aid of those who have lost their jobs, experience human suffering and risk losing their social identity. The Church is called to appear sensitive and attentive. It must not  support political oligarchies who disregard the needs of civil society and create a distance between ruling class and the people. Globalisation is to align the common good. And the Church, "which goes forth," must always intervene against selfishness and relativism.
Text: Giuseppe Nardi
image: Vatican Insider
Trans: Tancred vekron99@hotmail.com
Link to Katholisches...
AMDG
Posted by Tancred at 8:09 PM 11 comments: