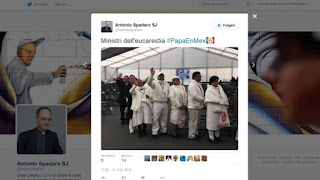 (Mexico City) Sources of information about the pastoral visit of Pope Francis to Mexico includes the Twitter account of the Jesuit priest, Antonio Spadaro. Spadaro is the editor of the Roman Jesuit journal La Civilta Cattolica . He is considered to be one of those closest  personal friends to the Argentine Pope. On September 2013 he published the first media interview with Francis.

HERE YOU CAN ADVERTISE »
The editor is very active on Twitter  and sends short messages several times a day, including on the Pope's Mass in Ecatepec in Mexico City. So  he also sent the above picture and wrote: "Ministri dell'Eucaristia" (Minister of the Eucharist). Such designation is explicitly rejected by the current provisions.
"Ministers of the Eucharist" are priests only, as the instruction Redemptionis Sacramentum 2004 reaffirmed. Did Father Spadaro mistake the "minister of the Eucharist" with communion helpers? A lapse or Freudian slip?
The picture shows namely without doubt extraordinary ministers of Holy Communion, which are briefly mentioned in the German extraordinary minister of holy communion. It is to lay people who may be appointed in urgent need case, what the Pope's Mass was the case yesterday in Ecatepec.

The introduction of the extraordinary minister of holy Eucharist is regarded as a precedent for a mechanism to establish changes in the Church.
In 1964 the Berlin Ordinarienkonferenz, the forerunner of the later Berlin Bishops' Conference, which included the bishops of the Communist GDR, issued by Rome's permission to employ "suitable laymen" the diaspora areas for Communion at home worship. The measure was justified to serve  the far-flung areas. In 1966 the exemption was extended. But then something amazing happened.
Although the measure for a given area was granted on the basis of a specific "emergency", it was dealt with in 1967 by the Pope Paul VI. approved instruction Eucharisticum Mysterium in its extension to the entire world Church. The GDR with its diaspora situation was atypical of the Catholic world. Because of the communist dictatorship and the isolation by the Wall, the situation there was also withdrawn from the direct view of the world public. Nevertheless, it served as a trial run which was totallly justified with a total ecclesiastical decision.
The situation is reminiscent of today's Amazon workshop and the attempt to receive permission there to allow  married "viri probati" ordination because of the alleged lack of priests. According to the ideas of the promoters, the "Amazon model" could be just as quickly extended to the entire Catholic Church. An exceptional situation serves to introduce an exemption. It's a breach in the wall that will quickly lead to the complete dam break.
As a result of the introduction of Communion,  priests in some churches no longer distribute Communion to let the layman take precedence. More often, there is no clear need for an extraordinary minister of holy communion, yet they are used. Even when in papal liturgies  it already comes to an undignified treatment of the body of Christ, as the World Youth Day 2013 in Rio de Janeiro or at the Pope's Mass in Manila in January, 2015.

The Effective Rules for Communion Helpers

The Roman permission stressing the exceptional status: the layman is only an "extraordinary" minister of holy communion, to be used only "if necessary".
In 2004, the Congregation for Divine Worship called with the instruction Redemptionis Sacramentum the provisions of achievement:

[154.] As has already been recalled, “the only minister who can confect the Sacrament of the Eucharist in persona Christi is a validly ordained Priest”.[254] Hence the name “minister of the Eucharist” belongs properly to the Priest alone. Moreover, also by reason of their sacred Ordination, the ordinary ministers of Holy Communion are the Bishop, the Priest and the Deacon,[255] to whom it belongs therefore to administer Holy Communion to the lay members of Christ’s faithful during the celebration of Mass. In this way their ministerial office in the Church is fully and accurately brought to light, and the sign value of the Sacrament is made complete.

[155.] In addition to the ordinary ministers there is the formally instituted acolyte, who by virtue of his institution is an extraordinary minister of Holy Communion even outside the celebration of Mass. If, moreover, reasons of real necessity prompt it, another lay member of Christ’s faithful may also be delegated by the diocesan Bishop, in accordance with the norm of law,[256] for one occasion or for a specified time, and an appropriate formula of blessing may be used for the occasion. This act of appointment, however, does not necessarily take a liturgical form, nor, if it does take a liturgical form, should it resemble sacred Ordination in any way. Finally, in special cases of an unforeseen nature, permission can be given for a single occasion by the Priest who presides at the celebration of the Eucharist.[257]

[157.] If there is usually present a sufficient number of sacred ministers for the distribution of Holy Communion, extraordinary ministers of Holy Communion may not be appointed. Indeed, in such circumstances, those who may have already been appointed to this ministry should not exercise it. The practice of those Priests is reprobated who, even though present at the celebration, abstain from distributing Communion and hand this function over to laypersons.[258]

[158.] Indeed, the extraordinary minister of Holy Communion may administer Communion only when the Priest and Deacon are lacking, when the Priest is prevented by weakness or advanced age or some other genuine reason, or when the number of faithful coming to Communion is so great that the very celebration of Mass would be unduly prolonged.[259] This, however, is to be understood in such a way that a brief prolongation, considering the circumstances and culture of the place, is not at all a sufficient reason.

[159.] It is never allowed for the extraordinary minister of Holy Communion to delegate anyone else to administer the Eucharist, as for example a parent or spouse or child of the sick person who is the communicant.

[160.] Let the diocesan Bishop give renewed consideration to the practice in recent years regarding this matter, and if circumstances call for it, let him correct it or define it more precisely. Where such extraordinary ministers are appointed in a widespread manner out of true necessity, the diocesan Bishop should issue special norms by which he determines the manner in which this function is to be carried out in accordance with the law, bearing in mind the tradition of the Church.

Back to Calvinist Communion in the Hand at Papal Masses -- Priest’s choice?

(Rome) After several of Pope Francis' celebrated solemn high Masses, it is obvious that the canonical “extraordinary form” of Communion in the hand is being practiced again in a big way in papal Masses. And according to the personal discretion of every priest.

Pope Benedict XVI. had only given Holy Communion kneeling and on the tongue to the faithful shortly after he became Pope (except Despite some cases like the Queen of Spain). Through the rediscovery of traditional practice, the reverence for the Eucharist should be strengthened to counteract deformation by the erroneous understanding in the minds of believers of a mere meal with common bread consumption.

Newly appointed in 2007, the papal master of ceremonies, Guido Marini said in June 2008, in an interview with the Osservatore Romano he explained that in future papal Masses, Communion on the tongue will prevail in a kneeling posture. This now no longer seems to be the case.

Canon law has always prescribed that Communion is received kneeling on the tongue as the actual form of Communion reception. With the liturgical reform after the Second Vatican Council, the bishops' conferences were granted the right to allow additional and valid exemption of forms for their area of ​​responsibility. From the exception, however, was a rule that made the actual exception to the rule immediately. In Germany, First Communion is almost everywhere taught everywhere since the 70s exclusively Communion in the hand. Of Communion on the tongue or even kneeling Communion in this large-scale re-education program in fact there is no more talk.

During dozens of scheduled Papal Masses, priests were instructed under Pope Benedict XVI. from 2008 to give the consecrated host only on the tongue. With few exceptions, the traditional practice was quickly put into effect again.

Since the inauguration of Pope Francis any uniformity has been lost. The Pope gives the deacons Communion, while it is received kneeling on the tongue. As the head of the Church, however, he gives no Communion to the faithful, as Pope Benedict XVI's example is minimized. Of the scheduled priests a large number only give Communion on the tongue. However, just as many priests give again Communion in the hand according to the Pre-Benedictine exception, when a communicant holds out their hands. A general practice, they know from most the parishes to which they were only taught by priests. Instructions for the priests as under Benedict XVI. is apparently no more. The form of Communion by the priest seems to be merely a option.