(Rome) On September 30, the inauguration of Don Giancarlo Dessì as the new pastor of Segariu in the Archdiocese of Cagliari. It is worth noting that a relationship between the Don Dessì of today and his relationship to Freemasonry has not been satisfactorily clarified. Can a pastor also be a Mason?

In the past, first rumors, then documents about an alleged lodge membership of the pastor appeared. Shortly before the arrival of the priest in his new parish a Sardinian lodge brother confirmed: "It's true: he was initiated in 2014". 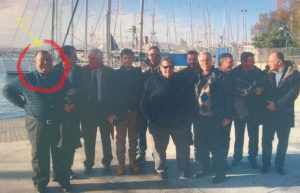 In the Archdiocese of Cagliari, nobody wants to get to the bottom of the matter. The Internet newspaper La Nuova Bussola Quotidiana (NBQ) researched the matter and encountered a wall of silence from archbishop's office.

For some time, the Sardinian priest has been suspected of belonging to a Masonic lodge. "That Freemasonry is a secret society is no secret. The fact that the Church of Cagliari practices the same secrecy as a priest is being suspected of being a lodge member is curious, if not ambiguous," said NBQ. Last July, as usual, the Archdiocese announced changes in the See. The list of transfers included Don Dessì. During his time as a pastor of the city of Mandas, there were accusations that he had entered a Masonic lodge. Specifically named was the lodge Armando Corona No. 5 of Cagliari, which belongs to the Grand Lodge of the Old and Accepted Scottish Rite of Italy.

Armano "Armandino" Corona (1921-2009), after whom the lodge is named, was a Sardinian doctor and contractor. He was a member of the left-liberal Republican Party of Italy and was President of the Regional Assembly of Sardinia. Corona, a member of the Lodge since 1969, was, above all, the Grand Master of the Grand Orient of Italy from 1982-1990.

In 2016, compromising photos of the priest emerged with the aproned brothers. The pastor denied and spoke of "photomontages" and "slander". At first it was said that the Archdiocese would initiate a canonical case against the priest, but then it became quiet. For two years no one in the Archdiocese wants to talk more about the matter, not even about whether an investigation was carried out or not.

"For the Church, the matter is clear: A bishop or priest who belongs to the lodge must be tried before an ecclesiastical court and laicized. Was Don Dessì subject to a canonical process? And if so, was he acquitted or convicted? Nobody knows anything, not even in Rome."

The result of several days of research? It was not possible to get a clarification from the Archdiocese about Don Dessì. 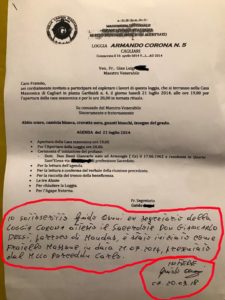 This includes an invitation and agenda for the Lodge meeting on 21 July 2014. The document is signed by the Secretary of the Lodge, who invited the chair, Gian Luigi Piras, for "temple work" on behalf of the Master. Each lodge brother had to appear in the "dark suit, white shirt, black tie, white gloves, insignia of his degree." The temple work on that summer evening provided above all for the initiation of a new lodge brother: "Dr. Don Dessì Giancarlo, a priest by profession."

The priest was also introduced in other documents as a lodge brother. For the temple work of 21 October 2014, he is described as a "speaker."

On one of the invitations is added in a handwritten note:

"I, undersigned Guido Asuni, former secretary of the Lodge Corona, confirm that the priest Don Giancarlo Dessì, pastor of Mandas, was initiated on July 21, 2014 as a Masonic brother."


NBQ contacted Asuni, who confirmed the information after initial reluctance. "It is true. I confirm that Don Giancarlo Dessì was initiated that year as a Masonic brother. At that time I was secretary of the Lodge Corona, but I left that year. So what I can confirm is that Dessì was at least part of Freemasonry in 2014. What happened then, I can not say, because I have changed obedience."

Asked how the priest justified his entry into the lodge at that time, Asuni answered evasively:

"Someone asked him about it, but he was vague, that's all I know, and there are situations that are secret."

NBQ wants to know from Asuni if ​​he has been contacted by the Archdiocese to provide information.

Asuni: "I was never called. Nobody ever asked me about it. One thing is certain: should Don Dessì in the meantime have left Freemasonry, he would have the duty to say this publicly, to clarify his position."

NBQ then again contacted the Vicar General of the Archdiocese of Cagliari, but they responded just as curtly as a few months earlier.

"We are not interested in this at the moment."

(Alghero) The traditional Institute of Christ the King and High Priest (ICRSS) is negotiating with the Government of the Italian Mediterranean island of Sardinia for the purchase of the former Pontifical Seminary of Cuglieri (not to be confused with the Sardinian town of Cagliari). The region had bought the seminar after its abandonment in 1976 but since then it has not been used. For cost reasons, they want to sell it.
Canonically erected in 1990, the Old Rite Institute of Christ the King in submitted an offer to take over the entire building complex in April 2012, as it has experienced strong growth due to many vocations.
In the Sardinian Parliament a parliamentary motion was introduced, with which the government has been asked why the transfer to the Institute has not yet been done. Una Vox Cagliariits is suspicions that after the posting of the sale, the regional government has been pressured  by the bishops of Alghero and Oristano to prevent the establishment of the traditional institution on the island. How Messa in Latino reported, other bishops had initially welcomed the establishment of a branch of the ICRSS. But their approval was withdrawn under pressure from the bishops of Alghero and Oristano. Meanwhile, the believers of Cuglieri have started a petition for the handing over of the seminar complex to the traditional priest affiliated institution.

The 3000 population community of Cuglieri (Sardinian Cullieri) is located in Central Sardinia and belongs to the province of Oristano (Sardinian Aristanis) and the diocese of Alghero (Aligehra Sardinian, Catalan Alguer). The place is just ten kilometers from the Mediterranean coast.
The bishops of Sardinia asked the Pope for financial support after the First World War for the construction of a joint seminary for the island.  In 1924 Pope Pius XI. met the request and the seminary was built at the expense of the Holy See, which is why it was given the honorary title "Pontifical Seminary."  The seminary was inaugurated in 1927 was built in the Pisan style of the 1300s and is similar in appearance to a medieval monastery. The simple style fitted well into the landscape of the houses that are built, modest and sober. The management of the houwse was handed over to the Jesuits. In 1970 the seminary was moved to Cagliari. Six years later the empty building was purchased by the Region of Sardinia.