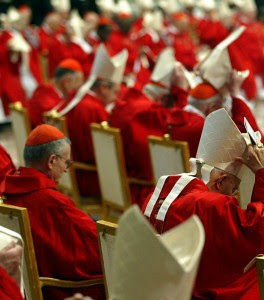 (New York) The North American bishops, it they were heard just after the Conclave last March, were decisive for the election of Pope Francis. Although they were not the "forgers" of the new pontificate, but their voices and their weight were ultimately decisive. Just from the United States, there now comes the first direct and surprisingly harsh criticism of Pope Francis. Expression of this is found in an interviews of the Archbishop of New York and chairman of the U.S. Bishops Conference, Cardinal Timothy Dolan and Archbishop of Philadelphia, Charles Chaput. Cardinal Dolan talks about a "lack of managerial and leadership quality," Cardinal Chaput of a certain dissatisfaction with the election of Cardinal Bergoglio among the circles of faithful Catholics toward the Pope.

Several cardinals of the United States were considered "papabili". However, in a joint statement just before start of the Conclave, a novelty, they announced their collective rejection, founded on the unexpected withdrawal because of possible "damage" to the Church, as an American pope could in other parts of the world result in inappropriate identification of the Church, or completely, of Christianity with the world power USA.

Accordingly, the American media celebrated the New York Archbishop Timothy Dolan Cardinal on his return to the conclave, as "Pope Maker". Cardinal Dolan is not the "creator" of the candidacy of his Argentine confrere. This is enough already back in the conclave in 2005. The actual promoters were known as Cardinal Martini 2005 and in 2013, Cardinal Lehmann, to name just two. In contrast to the penultimate Conclave of 2013, the alliance was much broader. Overcoming a two-thirds majority in an election without strong candidates or favorites is no easy task. Cardinal Dolan was considered the "Pope Maker" because the pivoting of the North American Pope voters (at least the majority), ultimately brought the decisive turning point in the conclave to the Argentine.

Well, surprisingly, criticism of Pope Francis comes straight from the U.S.. It is the first clear vocal criticism because so far the Cardinals and local churches had at least appeared to be carried away by the media cheering for the new pontificate. Cheering, which must not be forgotten, was especially one last scold of Pope Benedict XVI. The published opinion presented of the Church in a way as an acclamation, as a Pope had not in any case ever been. The reaction was inevitable: Francis Pope turns out to be quite the deliberate contrast to Pope Benedict XVI, as a connoisseur of amazing acts corresponding to media psychology and media-friendly.. The German-speaking bishops are more in the media's grip, as recently showed the incident in Würzburg seminary. There has only been a bishop who is not under the media's under control: the St. Pölten's Bishop Kurt Krenn. Bishop Krenn used his media fluency to convey Catholic doctrine, where his brother bishops were sometimes rather silent. For this he is not cheered in the media. Rather, he was their favorite bogeyman, but they could neither diminish his bravery in handling media or his intellectual stature. Whether Pope Francis will succeed in this. So far, the media cheering has exhausted itself more on trivialities of modern media icons, as they produce show business, sports, and sometimes even politics.

The criticism from the United States is therefore a remarkable indicator of the papacy begun in March. Cardinal Dolan brought them out in an interview with John Allen, a Vaticanist for the Old Liberal National Catholic Reporter. He was personally very direct, limited to specific issues, but more on a seemingly technical aspects, but this is only at first glance. "We also wanted someone with good managerial skills and leadership quality, and until now, little has been seen of it." With these words, the New York Archbishop described the pontificate of Pope Francis till then. One could speak of a frontal criticism. Cardinal Dolan has expressed his criticism already a few weeks ago on the brink of World Youth Day in Rio de Janeiro. The National Catholic Reporter published the Inteview on the 24th of July on the internet.

Nearly five months after the election of a pope one of the key figures of the conclave declared that Pope Francis has not been sufficiently a "manager" and not enough of a "leader". A Pope must be a "manager", he should have "leadership".

Cardinal Dolan: After Summer Break He is Finally to Appoint a New Secretary of State

In his concrete criticism, Cardinal Dolan limited himself to the occupation of the State Secretariat, continuing on to the top of the Roman Curia and the same under Pope Francis. On the eve of the conclave, dismissal of Secretary of State Cardinal Tarcisio Bertone was loudly called for by various parties. Cardinal Bertone was among the most important employees of Pope Benedict XVI. in the governance of the Church. He was not unjustly blamed for many mishaps that made the German Pope and his many opponents within the church a target of the media enjoyment for persistent accusation.

Cardinal Dolan then said he expects a change at the top of the State Secretariat before the summer break. And further: "I expect that concrete after the summer break a more concrete signal towards changing the administration."

The criticism by the President of the U.S. bishops' conference does not go beyond that. He remained therefore open to where and how criticism would appear from other American bishops to the official leadership of Pope Francis. At the same time, however, it was loud and slightly accentuated. To make the point he brought up the Archbishop of Philadelphia, Charles Chaput, the cardinal contender when his predecessor Cardinal Justin Francis Rigali reached his attained age of 80 in April of 2015. Archbishop Chaput, one of the most important American church leaders, is considered to be faithful and connected to tradition. He expressed also in an interview with the National Catholic Reporter , "a certain dissatisfaction" over the election of Cardinal Bergoglio to Pope, which was particularly noticeable among the faithful, loyal to Rome.

Cardinal Dolan did not take up the criticism of conservative or traditionally associated parts of the Church, about about liturgical changes by Pope Francis, the controversial "style" of the Pope, a certain ambivalence of the Pope to the major bioethical challenges of our time, homosexuality and the aggressive gender ideology. Cardinal Dolan was limited in his criticism on the issue of the "Leadership of Office". The Vatican expert Andrea Tornielli says that behind, a "typical American concern" hides: the call for efficient "managers". But that is likely to fall short. Cardinal Dolan is president of the Bishops' Conference, he measured his criticism well, considered and limited to one aspect of the risk of no special media attention, but this is directed toward the Pope in Rome.

Zeal For Action in Vatican bank - for incidental Catholic Church

Pope Francis Pope has shown zeal to date, especially in the context of the Vatican bank IOR and the Economic Affairs of the Holy See. That got a lot of applause, regarding the downright legendary banking institution. The use astonishment: the botched appointment of a personal representative in the person of the controversial Bishop Battista Ricca, the appointment of three commissions for the control and monitoring of the bank, of which at least one was but then too much occupied and another are seemingly doubtful reshuffles at the top of the foundation and finally a private motu proprio with some new rules. The Vatican Bank according to some conspiracy theorists who may have some beads of sweat on their foreheads and also some church enemies who dream of "legendary" riches of the Church. In reality, the bank is considered to be at 10 billion euros on their deposits, in international comparison, a small bank. Apportioned to the number of Catholics worldwide, there are just six or seven euros in the bank from each. Financial and economic matters are now but not really the most important affairs of the Catholic Church, not even the second most important, which is why this whole effort has but surprised some observers.

Cardinal Bertone, focused on the criticism of Cardinal Dolan to Pope Francis, will be 79 in December. A change is therefore coming 0one way or another. No pope has ever exchanged the Cardinal Secretary of State immediately after his election. There are other rhythms in the Church. Pope Pius XII. appointed none. As former Secretary of State, the Pope was his own Secretary of State. Pope Paul VI. kept to his predecessor from John XXIII. "Inherited" for six years. John Paul I did not make any personnel decisions due to his unexpected death. Only John Paul II appointed a new Secretary of State within a few months. However, Cardinal Jean Villot had died. Pope Paul VI took over, five months after the beginning of pontificate, so probably a quick dismissal of the French bearer and Council Secretary of the Polish Pope must remain speculation.

As a Jesuit Pope Francis takes the time necessary to make an informed decisions. He looking for his information and then decides alone. This is evidenced by his adherence to the appointment of Msgr Ricca for domestic prelates of the Vatican Bank, despite becoming known by his explosive and inglorious past. Previous decisions can not be returned. What are the announced in the media and emphasized by many cardinals who resided diocesan bishops demanded reform of the Curia is concerned, you will have to wait for the first meeting of the new eight-member council of Cardinals. The meeting is scheduled for early October. In progressive circles, after the initial euphoria, there is a slogan, not to place too high expectations for the new pontificate. The progressive religious women were the first who waved the Jubilee flags.