Permanent Apostolate of the FSSP in South Tirol

(Innsbruck) The Fraternity of St. Peter (FSSP) now extends its pastoral activity and now has a permanent apostolate also in the Diocese of Bolzano-Bressanone.

Already 15 years ago the first contacts to South Tyrol had been made. Priests of the Society of Saint Peter were invited to their parishes by friendly priests. 300 of the faithful had asked the diocesan bishop with their signature for the erection of a Mass location in the traditional rite. However, the promising start failed because of the then Bishop of Bolzano-Bressanone. The time was obviously not ripe yet. The Motu proprio Summorum Pontificum created by Pope Benedict XVI. initially freed the Mass in September 2007. 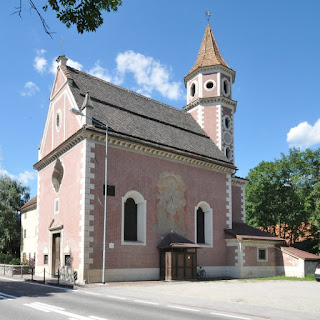 The pilgrimage church Mariahilf near Bressanone (built around 1650)

In the diocese, within two years there were two bishop changes. Since autumn 2011, the diocese has been headed by Bishop Ivo Muser. New possibilities opened up. Since June 2013, an FSSP priest celebrates Holy Mass once a month in the German church of Bolzano in the traditional form of the Roman Rite. From the summer of 2014, a second location in Bressanone followed in the same rhythm. Since then, the two episcopal cities, the ancient episcopal city of Bressanone (since about 960) and the new episcopal city of Bolzano (since 1964) have been reached by the Priestly Society of St. Peter.

The two Mass locations were looked after at the German church in Bolzano and the Mariahilf church in Brixen by the Upper Bavarian Mittenwald, which is itself looked after by Innsbruck already.

Additionally, contacts were established with the only Tyrolean Benedictine monastery, the Abbey of the Heiligenkreuz in Säben. It's a connection that blends well with the two Mass locations. Not only because the monastery is geographically located exactly between them, but because Säben from the 6th -10th Century was the first and oldest episcopal see of the diocese of Brixen.

The old bishop's palace, today's monastery, towers like a strong fortress of God on the Säbener mountain high above the Eisacktal. At the foot of the mountain, which for early Christians had been a safe haven, lies the small town of Klausen and the castle of Branzoll. The ascent to the monastery takes place from there on foot. The high age of Christianity on this venerable "Holy Mountain of Tyrol" can be felt everywhere.

Since 1686 there is a daughter of the Abbey Nonnberg in Salzburg on the mountain. Since then, contemplative Benedictine nuns live here in strict retreat. They dedicate themselves to choral prayer, domestic work and the gardens. Fr. Sven Connrade, the first priest of the FSSP, found a friendly reception with the nuns. Thus, the FSSP has its first office in Tyrol. 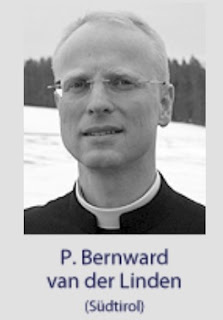 The monastery is the destination of many pilgrims to the Heiligenkreuz Church, one of the three churches of the monastery. There is also a guest house that is open to people looking for more than a few days more than just a hotel. Interested women can live in the monastery community.

From Säben the FSSP has looked after the two Mass locations whereby in Bressanone it was extended by the constant presence of a priest. In the Church of Mariahilf, the Holy Mass is now celebrated on every Sunday and public holiday in the traditional rite. This is a big win for the faithful in South Tyrol, which is gratefully accepted.

P. Conrad took over in the meantime new tasks in Bettbrunn. The South Tyrolean sites are now looked after by P. Bernward van der Linden, an FSSP priest with experience of the Benedictine charism, which is why he feels at home in the Benedictine Abbey on the Säbener Berg.

So there is the hope that in future in Bolzano on all Sundays and public holidays, Holy Mass can be celebrated in the traditional form of the Roman rite.

Brixen
Pilgrimage church Mariahilf in Zinggen
Brennerstrasse 37, 39042 Bressanone
4th Sunday of the month at 6 pm, all other Sundays and holidays at 9.30 am

Priestly figures: Pastor Josef von Zieglauer and the Tridentine Mass in the Diocese of Bolzano-Bressanone

Bishop of Brixen Gives Veto for Renovation of Altar Space

Art Contest: Winner Project with a Lack of Understanding of the Liturgical

The church renovation has been in swing since May 2014.  The sanctuary is untouched. A competition was held to determine what to do in   which nine South Tyrolean artists participated.The winning project chosen was the sculptor Lois Anvidalfarei.
When the project was presented to Bishop Muser,  it  was so hair-raising that he gave his veto. Since then, there have been long faces and volunteers among the church apparachiks, who sometimes have significant problems with episcopal or papal authority. The parish council feels offended and says that the negative decision of the bishop to Easter was "not good news".
Bishop Muser is committed to conciliatory language but remains in the matter. The project has been buried by him and should remain so. The bishop was particularly offended by the arrangement or fashionable disorder in the newly planned sanctuary, which lacks liturgical understanding. In particular,  Bishop Muser considered the altar arrangement unacceptable.

According to Anvidalfarei and the parish council, the altar should not take (Volksaltar) the central position, but be laterally offset and placed at the edge to allow an appreciation of the Ambo.  The Ambo and altar as equal members of the presbytery. It is a protestantantic reorganization, which reveals prolixity and especially a lack of awareness of the Eucharist as the central moment of the Mass and its sacrificial meaning.
The intentions of transformation  confirm a stunning lack of liturgical knowledge and  is everywhere to be found among the leading Catholic laymen. The middle and younger generation were  often never consulted.
Text: Giuseppe Nardi
image: Facebook page FF (screenshot) / Wikicommons bookseller
Trans: Tancred vekron99@hotmail.com
Link to Katholisches...
AMDG
Posted by Tancred at 11:53 AM 6 comments: