Liberation Theology Will Get a Boost if Cardinal Turkson


Edit: right now, he’s the most favored to be the next Pope. This article identifies some of his political views which are in line with Liberation Theology and Marxist thinking. Right now Cardinal Turkson is the overall favorite to be next Pope according to Paddy Power, despite attempting to take himself out of the running by telling the press what he’ll do when he becomes Pope.

There is a world where it is possible to ‘wipe the tears from the eyes of those who suffer injustice‘. So says the man tipped by many to become the 294th successor to St. Peter as Pope and spiritual leader of the world’s one billion Roman Catholics.

Cardinal Peter Turkson of Ghana, who currently serves as president of the Pontifical Council for Justice and Peace, is a renowned champion of the poor and marginalized.

In a lecture at Durham University Centre for Catholic Studies two years ago, Cardinal Turkson argued that:

“…despite the naysayers, economic resources do exist that could help wipe the tears from the eyes of those who suffer injustice, who lack the basics of a dignified life, and who are in danger from any deterioration in the climate.”

In a call to action, he added that the poor “benefit from champions in solidarity who believe that injustice can be reduced, that harmonious relationships can be fostered, that our planetary ecology can be made sustainable, that a world of greater communion is possible”.

In October 2011, the Pontifical Council for Justice and Peace he heads set out a radical critique of global financial arrangements, which skew wealth and power away from developing countries.

Another Bishop with connections to Ghana is Bishop Terry Steib S.V.D. of the Diocese of Memphis Tennessee in the USA. Interestingly, the coat of arms shows a connection to Marxist causes of black power movement and East Germany.

It’s not surprising that this Bishop is a very enthusiastic supporter of aberrosexuality.

Part of his coat of arms even has a red chicken, symbolic of the Convention People's Party of Marxist agitator  Kwame Nkrumah, who was backed by the Soviet Union. 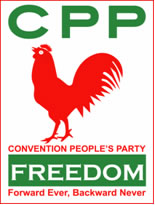 Here is a description of Bishop Steib’s coat of arms, since none of the examples on line can be blown up successfully to give a decent picture:


The arms of Bishop Steib feature a tri-colored field - black, red, and green - which recalls the Flag of the Black Liberation Movement [represented by the cockerel]; this in turn is based on the Flag of the nation-state of Ghana, whose independence in 1957 gave rise to the general decolonization of the African continent. The colors represent, respectively, the great people that has sprung from this land, the blood shed in its defense, and the green plains of Africa. [It looks a lot like the flag of Communist East Germany, too]