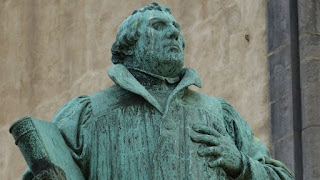 
The Bishop of Magdeburg is Msgr. Gerhard Feige, one of the last appointments of bishops by Pope John Paul II. In 2014  Feige appointed by Pope Francis to the Pontifical Council for Promoting Christian Unity.
Feige supported in 2015 the demand of Bishop Stephan Ackermann of Trier to change Catholic moral teaching. Feige said it was "finally time to stand open to the unvarnished reality and in the spirit of Jesus Christ, sensibly and fairly to struggle for responsible and life-serving solutions."  What was meant was the recognition of homosexuality, divorce, remarriage, and premarital sex.
This eccentric pilgrim action by a Catholic diocese, which wants to bring the "with Luther" demands to Rome,  finds a parallel to another controversial ecumenical initiative. On October 31, Pope Francis is to participate in  a Catholic-Lutheran Reformation commemoration in Sweden. Pilgrims will also  travel in autumn from all over Germany "With Luther to the Pope."
The patronage for the action has been assumed by  the ambassador of the Federal Republic of Germany to the Holy See, the former Education Minister Annette Schavan (CDU). Schavan belongs to the progressive ZdK milieu. From 1991 to 2008 she was a  member of the Central Committee of German Catholics [We Are Church types] and held from 1994 to 2005 the office of Vice President. The Forum of German Catholics designated the Schavan appointment as ambassador to the Holy See as an "affront to the Catholic Church".
The German Bishops' Conference has established in 2013 its own project site "Reformation commemoration".
Text: Giuseppe Nardi
image. pixabay
Trans: Tancred vekron99@hotmail.com
Link to Katholisches...
AMDG
Print Article
Posted by Tancred at 3:51 AM 2 comments: 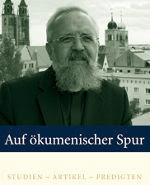 Edit: Bishop Ackerman made controversial statements contrary to Catholic teaching and a surprising number of voices have been critical of him, but others are also critics of the critics, like the Old Liberal Bishop of Magdeburg.

Magdeburg (kath.net / CBA / red) The Magdeburg Catholic Bishop, Gerhard Feige on Thursday defended the controversial statements of Bishop Stephan Ackermann of Trier and criticized those bishops who he saw as publicly critical. "I think it is inappropriate, when bishops are manipulated by the media and turn against each other," Feige said to CBA. Several important German bishops had previously condemned Ackermann's remarks publicly.

Feige showed his solidarity with the Bishop of Trier and stressed that it was "about time to openly provide the unvarnished reality and to engage sensitively as well as to responsibly provide life-serving solutions in the spirit of Jesus Christ."

In view of the criticism leveled at Ackermann's theses, Feige said: "It does not help to always review only prohibitions or to present concerns.»

The bishops Konrad Zdarsa (Augsburg), Heinz Josef Algermissen (Fulda) and Wolfgang Ipolt (Görlitz) and the spokesman for the diocese of Eichstätt and Regensburg, apparently on behalf of their bishops, distanced themselves from the statements of the Trier bishop, to Catholic Internet newspaper "kath.net". Recently the Roman Curia Cardinal Brandmüller also leveled his criticism of the statements.