Silent March for the Kidnapped Metropolitans in Amman 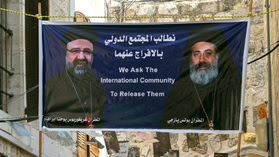 Damascus / Beirut, 20.5.13 (Yarmulke) On Tuesday the Christian churches organized a silent march in which they are demanding the release of the two Bishops abducted a month ago in Aleppo, Metropolitan Mar Gregorios Yuhanna Ibrahim and Boulos Yazigi. "The initiative is to have all Christian denominations connected,” said Archbishop Maroun Lahham, Vicar General for Jordan of the Latin Patriarchate Jerusalem for Vatican news agency Fides.

At the same time in the Old City of Jerusalem, the release of the two metropolitans Aleppo is required. On Tuesday, the Christian churches call in Amman, Jordan in a silent march for the release of the two. (Photo: Andrea Krogmann, 2013) Also on Tuesday there will be an international conference on the situation of Christians in the Middle East, in which the situation of the disappeared Aleppo metropolitans and the other victims of abduction will be raised, at Notre-Dame-du-Mont monastery in Beirut. It has been organized by the World Council of Churches, together with the Near Eastern Churches MECC conference, for which 150 participants are expected, in particular, it should also address questions of Christian-Muslim relations, the threat of extremism and social justice. [Oh, that slippery concept again.]

In the last MECC General Assembly, a proposal was drawn up, which was taken by the Central Committee of the World Council of Churches in 2011. The Central Committee noted at the time that "the living faith of Christians has its roots in the Middle East. This faith is nurtured by the unbroken testimony of the local Churches, whose roots go back to apostolic times." Without the Christian presence there, the coexistence of peoples of different religions and cultures in the Middle East, which is "a sign of God's love for all humanity", would be in danger.

Michel Nseir, who is responsible for the activities of the World Council of Churches Middle East, emphasized now that the "ecumenical concern for the importance of the Christian presence in the Middle East" significantly differs from the attitude of those "who want to inflame Islamophobia". Just down the road on the forthcoming 10th Assembly of the World Council of Churches in Busan, it was necessary in the "pilgrimage for peace and justice” to involve the churches in the Middle East and their take concern with "generous solidarity and a truly ecumenical spirit of unity in action". Among the speakers at the conference - scheduled for the 25th of May - is the General Secretary of the World Council of Churches, Samuel Kobia, the Catholic Archbishop of Abuja, John Cardinal Onaiyekan, the Former (Orthodox) Lebanese Minister Tarek Mitri and the Coptic scientist and former adviser Mursi Samir Morcos.

Assad talks about the Abduction

Syrian President Bashar Assad has taken the first time publicly on the fate of the two abducted Aleppo metropolitans position. In an interview published at the weekend with the Argentine daily newspaper "Clarin" he was asked, among other things about the two bishops. Assad replied: "We have preliminary information that they are close to the Syrian-Turkish border. We are pursuing this matter very closely and cooperating with the Orthodox patriarchates, so that the Metropolitans will be freed from the hands of terrorist groups, by whom they have been kidnapped."

Edit: just for once it would be nice to have something like this not become co-opted by agitating Socialist entities like the World Council of Churches (another ape of the Catholic magisterium) and their quest for “social justice”, however, any ecumenical effort on behalf of these men is something most Catholics can agree upon.
Posted by Tancred at 9:46 PM 1 comment: