Ave Maria University Board of Trustees
Announces Jim Towey as School's Next President
AVE MARIA, Fla. (February 10, 2011) - Ave Maria University's board of trustees announced today that Jim Towey will be the university's next president.  Towey will be responsible for the day-to-day operations as president when his term begins on July 1, 2011.  Thomas S. Monaghan, who currently serves as Chancellor and CEO of AMU will remain Chancellor, but will relinquish the responsibilities of CEO and hence the oversight of the daily operations of the university.

The board of trustees voted on the appointment of Towey at its regularly scheduled meeting earlier this week.  Chairman of the board of trustees, Michael T. O. Timmis, made today's announcement on behalf of the board.  Timmis praised the incredible vision of Monaghan and the solid foundation that he has set in place for AMU.  He also talked about the confidence the board has that Towey is the right person for AMU at this stage of its development.

"This is a huge win for Ave Maria University," Timmis said.  "We retain the vision and experience of our pioneers, while seamlessly handing over the reins to the next generation of leadership.  It is the belief of the Trustees that Jim Towey is the most desirable Catholic university president in America today.  And I am thrilled to announce that he is going to be our president." 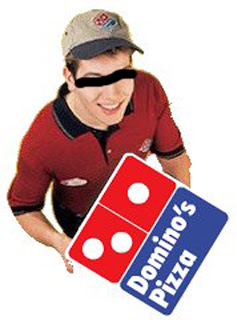 Two Americanist peas in a pod: It tells you a lot about both institutions at FUMARE, where you can see Catholicism up in smoke here.

Also check out the recent goings on with AVE's nearby Frankenstein lab, here.

Photo from: Iceland Blog about experience working for Iceland's second Domino's.
Posted by Tancred at 7:55 AM No comments:

Tom Golisano is Pro-Life, for real this time.

It is now apparent that Tom Golisano who gave 4 Million Dollars to Ave Maria University, is really pro-life all alone. It wasn't clear before, but now it is.

CHESAPEAKE, Va. (Catholic Online) - I recently wrote an article on the generous four million dollar gift received by Ave Maria University from Tom Golisano. Some within the broader Pro-Life and Catholic community raised issues concerning the acceptance of the gift, others concerning the naming of the new athletic facility after the donor.

Things just keep getting deeper and deeper for him. First he fires Father Fessio SJ, from his position at Ave Maria as Chaplain, then Pizza Magnate Tom Monaghan bans Wanderer reporter from covering a $4 Million investment by pro-abortion "fiscal conservative" Tom Golisano.

Another article by Roman Catholic World...
Posted by Tancred at 11:18 AM No comments: