Secessionist Movement in Trieste Recalls its Place in Habsburg Monarchy


Edit: It looks like the city of Trieste prefers Habsburg Monarchs to the Republican government of Italy. We received this declaration from the e-mail:

On Sunday morning of the 15th of December, before the court, many citizens of Trieste will declare the renunciation their Italian citizenship.

We, the people, want to reestablish full sovereignty for the Free State of Trieste. This movement was born in the serious difficulties faced by the city itself, for its region and for all of Europe. The past annexation was accomplished outside of the legality of civil law, in local as well as international standards: The peace settlement with Italy in 1947 in Paris which was singed and continues in force -- continues to be systematically ignored.

We, the people, we are the citizens of the Free Territorium of Free Trieste and intend, therefore to live legally in a state of individual and collective well being.

The Free Territorium of Trieste is, is by definition, multicultural and multi-lingual and understands its historical and geographical place in Middle Europe.

We are establishing ourselves for the Internationalization of the economy of our region and, the impulse of our place for many years in the Habsburg Monarchy, we advocate our continuation and the broadening of the mental openness of our population for other languages and cultures.

The free harbor of Trieste, the most important motor for our economy, can not be excluded or prepared for the settlement of real investments, without producing the previous legality.

So soon as these will be returned, we want to make good the progressive progress of innovation, to promote the foreseeable industrial developments and the settlement which today's reputation of stagnation of technology and is born according to the preservation of the environment. Trieste has suffered through the complicity of all administrations, which in the past decades have been a caused a nuisance in our area, and its hinterland are today under morbid debts of a no longer bearable environmental strain.

It hasn't bypassed us, how the Italian State counteracted a concourse and are in the clear, that whose causes do not lay in Trieste and that whose consequences are detected in Trieste's part is to be seen traces by reason of its progressively illegal status of the current administrative power.

By reason of this gripping economic decline the current administration is above all not in a position, for our existential important reforms -- to accomplish it as an attenuation of the tax burden.

While Europe puzzles over the causes and the solutions of the current crisis, our movement aims then to improve the quality of life in our region palpably, to closely oversee the conduct of human rights conventions and to implement the rights of self-determination of the people in fact.

"Free Trieste" represents the living interests of the overpowering majority of the population in their tributary areas and asserts therefore, the political, legal, economic and tax rules of the Peace Agreement in effect its legal path. Thus, on that it follows the reestablishment of its legality is our highest objective.

We, the people, want therefore, want to reestablish the complete sovereignty of the Free State of Trieste.
info@volontaritrieste.eu

Rome: After the Secret Meeting, Everything is As Before 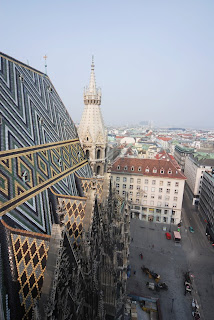 Edit:  when three hundred bad priests are foolish enough to sign their names to a petition suggesting they no longer believe what the Church teaches and don't intend to obey what it commands, it's time to take them at their word.  The Pastors' Initiative has been ballyhooed in the Austrian and a bit in the world press for a few months now, but not a single word about the Pastors Initiative to OBEDIENCE, which actually has more signators.  At least ORF [Ex-Reichsender Vienna] mentioned it recently.

About 400 Austrian priests under the title "Call to Disobedience" [Let's see how disobedient they are when they are sent packing with a small severance] are seeking reforms like the allowance of women and married to the office of the priesthood, have caused the formation of a counter-movement.    Under the Motto "Call to Obedience", they view themselves as Catholics true to Rome. [They go on to mention the 1,500 singers of "Call to Obedience".  Actually, there are now  2241 of which around four hundred are priests and religious.]

Here's an analysis of the present state of negotiations regarding the issue in Rome right now.  Members of the Congregation want more action, but nothing decisive.


No one has the courage, to challenge the media bosses and their useful idiots.  The cowardice is rampant among the Austrin Bishops -- and in the Vatican.


(kreuz.net, Wien) The meeting between Austrian Bishops with the Roman Dicastries about the Old Liberal one man show "Pastor's Initiative" will have no "dramatic consequences".

This not so surprising information was played out by the Bishops to the anti-Church Vienna daily, 'Kurier'.

The Bishops haven't "received any homework from the Vatican".

The Old Liberal speaker of the Austrian Bishops Conference, Paul Wuthe, referred banally to the meeting as "working discussion, as it regularly appears."

From This The Vatican Hasn't Learned the Truth


The journalist Guido Horst awoke in 'Die Tagespost' the impression, to know more.  Actually his reports were also vague.

The discussion about 'Pastor's Initiative' have taken place on Monday afternoon.

Four Austrian Bishops met with the Prelates of the Secretary of State as well as the CDF, Bishops and Congregation for Clergy.

Horst believes that for the Pope and the Curia the moment has come  to cease "merely observing the break from Rome movement without decisive action."

The Vatican side of the meeting attempted, "through intentional and detailed questions to measure the weight of the threat of the Pastor resignation, if it were [allegedly] to result in a Church schism."

The Media Bosses Rule in the Church

Cardinal Schönborn doesn't want to do anything else but de-escalate -- says Horst.

The Prince of the Church hesitates to direct the taking of canonical steps.

A clarification could lead from a till now latent, to an open schism.

This is the fearful view that the Viennese Cardinal has portrayed for the Vatican.

Actually that is a bluff:  Because you can't base a church with only with the media bosses and individual faithfuless clerical retirees.

Where is the concern?


A few voices in the Roman Curia would like that the Bishops not put up with the creeping schism any further, writes Horst.

The faithful need orientation, even if the clear words might mean that one loses a [nominal] part of the Church membership -- which one would lose in the long run anyway.

Even the Pope is concerned about the alleged rebellion of the media bosses in Austria.

One pushes his inaction to the next

Even Horst views the Curial Cardinal of Vienna as the problem.

One wants to avoid the impression that Rome will act against dissenters.

It would be easier to  see, "if the competent bishops, that is, the pastors in the Alpine Republic of Austria, would effect a clarification among their priests."

Because:  "If the 'Pastors' Initiative' can be given an international reach, then the opportunity to portray it as a purely Austrian phenomenon will be lost."

"Then the Vatican will have to intervene at last."

But then, the "international reach" would be the same bluff as the fear of an alleged schism.

Schönborn said in several interviews that he was not denying the urgent need for reforms of the Church. However, the archbishop also spoke out against Schüller's suggestions which conservative representatives of the Church consider as radical propaganda.
They also accuse Schüller of trying to split the Church. Schüller said the Church was on the brink of breaking up indeed – because of its leaders’ unwillingness to react to significant developments in today’s society. Austrian Church officials did not confirm that the Preachers’ Initiative was spoken about in the Vatican on Monday. Newspapers report that the movement’s appeals were discussed indeed. Schüller said today he was not afraid of consequences over his actions.
The ex-Caritas Austria president announced: "I appreciate that the Worldwide Church starts thinking about our ideals. Maybe this was the start of something." Schüller said last week he planned to cooperate with priests abroad who shared his opinions. "We receive a lot of approval from Catholic reform movements all over the world," he said. The Probstdorf parish priest also criticised the Vatican for its conservative attitude. Schüller claimed it bore resemblance to an "absolutist monarchy". He added: "The Catholic Church must finally start taking its members seriously."