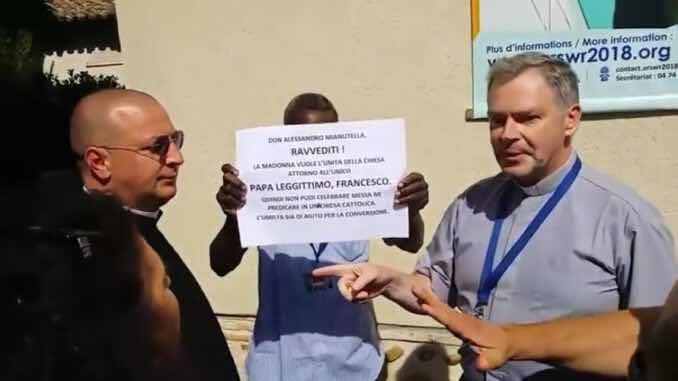 Don Minutella is prevented by the church rector of Ars from entering the sanctuary. An visiting priest of Ars holds up a prepared sign indicating that Don Minutella should recognize Francis as a legitimate Pope.

(Paris) The website of the Sanctuaire d'Ars states that the basilica of Ars, the parish house of St. John Maria Vianney and the chapel where the heart of the holy pastor of Ars is kept are open to all and can be visited daily "for free.” In reality this is not true for everyone, at least not for the priest Don Minutella from the Archdiocese of Palermo and his group of pilgrims. He was forbidden access. How is that?

Don Minutella received international attention for his criticism of Pope Francis' administration. The Sicilian priest was pastor of a social hotspot west of the city on the Tyrrhenian Sea. He is also the founder of a spiritual community called Little Garden of Nazareth in the Archdiocese of Monreale. For his apostolate, he uses modern means of communication, especially the Internet. Because of his loyalty to the Catholic faith, he became a sought-after preacher throughout Italy. Under Pope Benedict XVI.  he discovered that he “personally preferred” the traditional form of the Roman rite in which he has since celebrated.

In autumn 2015, Pope Francis appointed a new Archbishop of Palermo, who was inaugurated in December 2015. Under him, the conflict came to a head. Unlike his predecessor, he did not want to be patient with Don Minutella. The archbishop admonished the priest and eventually deprived him of his parish, despite the request of the faithful to leave their pastor. But the archbishop did not withdraw from his punitive action. Don Minutella was declared a troublemaker. Without office, he left the Archdiocese of Palermo and retired to his establishment in the neighboring archbishopric Monreale. The long arm of the Archbishop of Palermo was there, too. The city council of Monreale issued a demolition order for the establishment of the spiritual community. Don Minutella, who had been silent himself, said nothing. The staff spoke of a flimsy pretext to regard Don Minutella as persona non grata.

Although the priest kept to his self-imposed silence, in the fall of 2017, Don Minutella was suddenly asked to make a pledge of allegiance to Pope Francis within 48 hours, otherwise he would be excommunicated. The priest responded with the Great Creed, whereupon he was "excommunicated" for disobedience.

His reaction was a call for "resistance" because his patience also came to an end. In an appeal he called on Pope Francis to defend the truths of faith and ecclesiastical order. In his catechesis and sermons, he continues to speak plain language, but denies the legitimacy of Pope Francis. By doing so, he makes it hard for believers who are seeking guidance to follow him, and offers his opponents plenty of room to attack him.

Recently, Don Minutella undertook a pilgrimage through France with numerous pilgrims. So last week they also reached Ars for the workplace and grave of St. John Maria Vianney. But there they received a surprise that no one had expected. In front of the sanctuary, excited and regrettable scenes played out with mutual accusations and reproaches. 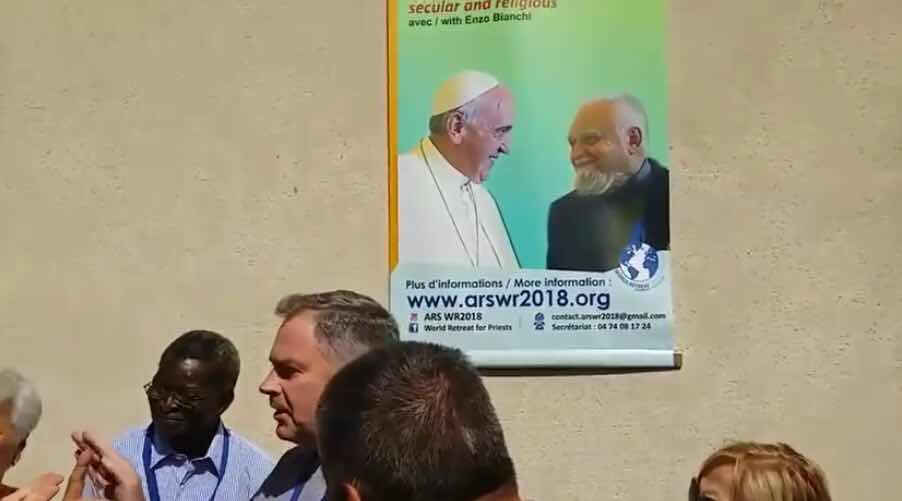 The dispute moved under this banner promoting the "false prophet" Enzo Bianchi, who is to explain the Magisterium of Pope Francis

The church rector already awaited Don Minutella in the forecourt and forbade the priest to celebrate Mass. After a partly noisy back and forth, the group was granted access to the basilica on the condition that they remain "silent". During the time allowed, the group was overseen by two priests.

A video captured the unusual scene.

The church rector of Ars approached the group and said that they had received "information" from the archdiocese of Palermo that "you are a sect". Don Minutella had, as is usual, registered his pilgrimage in advance in Ars.

The fact is that a priest, who does not contradict the doctrine of faith at all, was hindered in the celebration of Mass and to whom access was granted only with difficulty.

In fact, Don Minutella - and even those who are close to him - argue about the wisdom of this move - Jorge Mario Bergoglio no longer considers himself the rightful pope. That is indeed serious. However, he does not question the papacy. He also denies being a sedevacantist..

The "false prophet" is welcome

At the same time as Don Minutella was almost denied access to the celebration of Mass in Ars, a banner bearing the name of the "false prophet" Enzo Bianchi  as Msgr. Antonio Livi, former dean of the Philosophical Faculty of the Lateran University, describes him. Enzo Bianchi is to explain in Ars "the Magisterium of Pope Francis".

How does it fit together?

The dubious figure of a self-styled "monk" and "prior," who is neither monk nor prior nor priest, who doubts, reinterprets, or denies so much that the list would be too long to enumerate. But it must be mentioned that he doubts the real presence of Jesus Christ in the Eucharist.

So what counts in the Church? Fidelity to the truth of the faith and the popes since the apostle Peter or the fidelity to the person of the current Pope? Of course, the two aspects have to form a unity. A contrast was constructed in the concrete case of those who invite the laity to entertain Enzo Bianchi as a speaker at Ars, but not to let the priest Don Minutella enter the sanctuary.

It becomes more understandable when you know that the church rector maintains personal contact with Enzo Bianchi and visited him in the "monastery" Boso.

The meeting in Ars took curious shape, as the church rector showed a prepared poster on which Don Minutella was asked to recognize the incumbent Pope. When Don Minutella asked what it was like to have the catholicity of Enzo Bianchi, the rector of the church did not answer, but shouted for it all the louder: "Long live the Pope! Long live the Pope! " 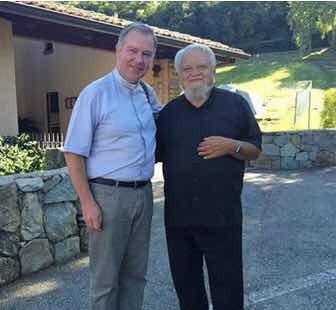 Don Minutella told the church rector that he had no problem with that. He stood faithfully and firmly with the papacy. What he does not believe in is Jorge Mario Bergoglio and his teaching. Don Minutella represents the position that Benedict XVI. Is still the legitimate Pope.

At this point, the subtlety and fragility of the position of Don Minutella becomes clear, for Francis is the legitimately elected pope. Benedict XVI. has never admitted he does not recognize him as his legitimate successor.

More complex is the question of the "heretical pope" as the Correctio filialis in autumn 2017 showed. Don Minutella deduces from this that the legitimacy of the incumbent Pope is ipso facto expired because of the spread of heresies. But who can prove that the election of Pope Francis is directed by the "Mafia of St. Gallen" and thus invalidated? Who has the authority to declare that Pope Francis disseminates, promotes and does not suppress heretical ideas in order to explain the loss of his office?

There is a drama in these questions, which is apparently felt by many faithful, but also by priests. Also Don Minutella is one of them. However, the consequence he draws does not make it easier for believers, but complicates the situation, as reactions to his activities in recent months have shown.

But what does the incident of Ars show?

Especially, and painfully, that there is a great deal of confusion. Everyone is allowed to enter the basilica, no matter what they think or say about the truths of faith except whoever denies that Jorge Mario Bergoglio is the rightful pope.

Even Cardinal Müller, the prefect of faith in Rome until June 2017, described the current situation of the Church as extremely grave at the end of June because believers who want to remain faithful to Catholic doctrine and creed are branded as "conservatives" and driven out of the Church. 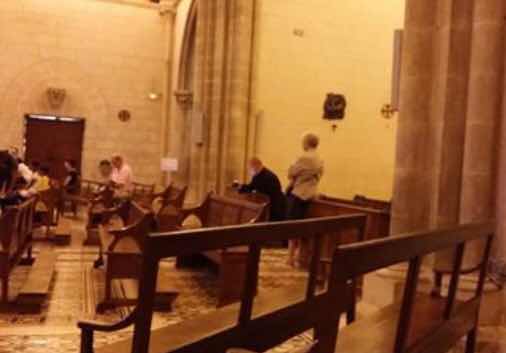 Under such conditions, it is not easy for those who wish to remain faithful to find the right measure. Some deny the lawfulness of the reigning pope, others take refuge in miracles and private revelations. A few days ago, the intellectual, Roberto de Mattei, warned of this phenomenon. But he also named a cause: If believers no longer receive the necessary answers and guidance from those who should give them, ie the bishops and the priests, then they seek answers elsewhere.

Don Minutella himself speaks of "grotesque moments" first in Nevers, then also in Ars. On his webpage he operated for the radio show Domina Nostra, there were some photos. They show how a lay sister (without a habit) supervised Don Minutella in prayer.

As part of the celebrations during the Year for Priests, 30 French bishops, including two cardinals, participated in a pilgrimage to Ars on Sunday, February 14. These photos are from the official website for the Shrine of St. John Vianney. Among the posted photos we notice the blessing of a brand new bronze statue of the saint that was installed near his famous rectory. The pilgrimage took place amidst the annual celebrations surrounding the Cure of Ars’ entrance into the town to take up his new assignment in 1818

Link to originals and photos...
Posted by Tancred at 11:38 AM No comments: