Archbishop Tlhagale: Priests who have been found guilty of the sexual abuse of minors, should be excommunicated latae sententiae.
(Pretoria) The Archbishop of Johannesburg in South Africa, Msgr. Buti Tlhagale, calls for the excommunication, latae sententiae by priests who have been found guilty of sexual abuse of minors.
Archbishop Tlhagale made the request in the context of his sermon last Saturday on the occasion of a priestly ordination.
The offense is so grave and so badly destroys the perpetrator's priesthood that serious consideration should be given in the Church to including sexual abuse of minors in the catalog of crimes that automatically lead to excommunication.
"There is a tangible indignation against the Church's hierarchy for its complicity, for its silence and for its cover-up," said the archbishop, who showed great understanding for this indignation.
"The halo of the Catholic priesthood has been broken by perpetrators," who commits such crimes, and should have no share in the priesthood.
Text: Giuseppe Nardi
Image: Youtube (screenshot)
Trans: Tancred vekron99@hotmail.com
AMDG
Posted by Tancred at 11:54 AM 2 comments: 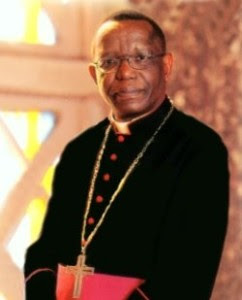