Lesbian and Gay Association Berlin-Brandenburg: Archbishop wanted to check in a personal conversation about the situation of homosexual and transgender refugees - They are confronted with violence in their lodgings even in Germany.

Berlin (kath.net/KNA) The new German capital's new Catholic bishop, Heiner Koch visited a center for migrants, lesbians and gays (MILES) on Thursday in Berlin-Charlottenburg. Here, the Archbishop wanted to check in with a personal conversation on the situation of homosexual and transgender refugees, said the Lesbian and Gay Association Berlin-Brandenburg (LSVD). They are confronted by violence in their lodgings, even in Germany.

The encounter took place in the Archbishop's Chancery, the administrative headquarters of the Archdiocese of Berlin. Subjects were then, the employment of homosexual staff in the service of the church and the demonstration critical of the Church, taking place shortly after Pope Benedict XVI's Berlin arrival on 22 September 2011. The LSVD was one of the organizers of the anti-Pope demonstration. 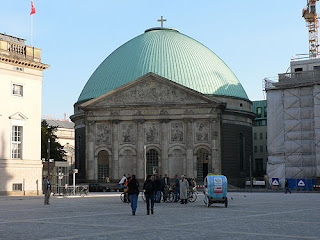 Edit: reading between the lines, you can tell that he means to destroy more of the Catholic heritage of a predominantly Protestant city.

The new Archbishop Heiner Koch seeks an amicable solution in the controversial renovation of Berlin's St. Hedwig's Cathedral,  because "to renew a building so that it destroys the community, does not make sense."

Berlin (kath.net/KNA) In the controversial renovation of Berlin's St. Hedwig's Cathedral, the new Archbishop Heiner Koch seeks (Photo) an amicable solution. "To renew a building so that it destroys the community, does not make sense," he said on Wednesday in his first press conference in Berlin. "Then the renovation is a fiasco," said Koch, who was   appointed by Pope Francis to succeed Cardinal Rainer Woelki.

For the renovation and remodeling of the cathedral there is a design that took first place in an architectural competition a year ago. At issue is especially the plan to close the large bottom opening applied 50 years ago in the center of the cathedral with staircase to the lower church. The new Archbishop has to decide on the implementation.

Koch has  already said he has received many "menacing, sharp" emails on the renovation design. "If you agree to this approach, you will not have many friends," he quoted from it. Koch takes office on 19 September. The designated Archbishop announced that he would "look again exactly" at the plans. At the same time, he stressed,   there was a stress on "urgent action".  Moreover, the competition had been completed, and there were already ​"factual decisions" made.  Moreover, there are different liturgical requirements for the Cathedral today   than 30 years ago.

Even with the also controversial structural reform of the Archdiocese, Koch signaled his willingness to talk. The criticism is particularly the plan, which is to currently combine  105 parishes in Berlin, Brandenburg and Pomerania to around 30 large parishes by 2020. Koch also has received his own words already from letters that clearly made ​​a "tremendous fear of anonymity and homelessness".

The future archbishop promised "to familiarize himself with the local communities on the way." He defended the foundations initiated by his predecessor for reform: "I can not see that it is factually incorrect."  The question of the best structures should, however, "not be answered uniformly," he conceded at the same time. "Since the archdiocese is too different." But he also warned that he was to reform the structures. They are only the means to an end. The principal issues were "how the Church can fulfill its responsibilities in a changing society." [Get ready for more modernism in Berlin.] (C) 2015 Catholic News Agency KNA GmbH. All rights reserved. Photo Bishop Koch (c) Diocese of Dresden / M. Kasiske
Link to Kath.net...
Trans: Tancred vekron99@hotmail.com
Photo: Wiki

After the Kristallnacht pogroms that took place over the night of 9–10 November 1938, Bernhard Lichtenberg, a canon of the cathedral chapter of St Hedwig since 1931, prayed publicly for Jews in the evening prayer following. Lichtenberg was later jailed by the Nazis and died on the way to the concentration camp at Dachau. In 1965 Lichtenberg's remains were transferred to the crypt at St. Hedwig's.

(Berlin) Bishop Heiner Koch of Dresden-Meissen was appointed as the new Archbishop of Berlin by Pope Francis today. The appointment comes in appreciation of "Marx'ists and Kasperians" (Hubert Hecker) in the German church. Bishop Koch was elected to the Episcopal Conference alongside Cardinal Reinhard Marx of Munich and Freising and Bishop Franz-Josef Bode of Osnabrück by the German Bishops' Conference for the Synod of the Synod of Bishops next October.
Koch is a party to the "opening" of Cardinals Marx and Kasper, albeit he is publicly nuanced reserved. When it comes to homosexuality, he rejects an opening, but pays tribute to homosexuals and verbally encourages widespread recognition. When it comes to admission of remarried divorcees to the sacraments Koch finds probabilistic. Serious opposition to a reinterpretation of  Catholic marriage and morality for pastoral practice is not something he is  previously given him credit for.
On Whit Monday Koch attended the secret meetings of the Kasperians at the Gregorian University in Rome with Cardinal Marx.
A month before his surprising resignation, Pope Benedict XVI appointed Koch on January 2013 the Bishop of Dresden-Meissen. Previously he had been in Cologne as  Auxiliary Bishop of Cardinal Joachim Meisner.  He was already appointed auxiliary bishop in 2006 at the request of Cardinal Meisner by Benedict XVI. The Diocese of Dresden-Meissen is part of the ecclesiastical province of Berlin, of which  Koch will be Metropolitan.
Text: Giuseppe Nardi
Image: Wikicommons (Martin Ruschl)
Trans: Tancred vekron99@hotmail.com
Link to Katholisches....
AMDG
Posted by Tancred at 12:42 PM 5 comments: