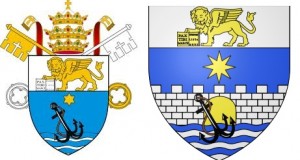 (Venice) The Spanish Vaticanist José Fernández de la Cigoña has published on his blog La cigüeña de la torre the coat of arms of the sainted Pope, Pius X and those of the newly appointed Patriarch of Venice, Msgr Francesco Moraglia, appointed as the new Patriarch of Venice on January 31st.  Both have elements of the honorific of the Patriarchate of Venice.  Giuseppe Melchiore Sarto,  the former Pope Pius X, adopted these arms from 1896-1903, which was once associated with the world famous palace chapel of the Doge of Venice.

The Patriarch, Francesco Moraglia, whose chosen coat of arms upon taking his chair as Patriarch on the 25th of March,  correspond almost congruently with the arms of Pius X, who as his predecessor 115 years ago, occupied the same office.

The arms show the golden lion of St. Mark in the upper part on a silver field.  The lower part shows a golden star in the upper half of the light blue field (heaven), which symbolizes the Virgin Mary, the eight points themselves represent the number of the beatitudes. In the lower half is the alternating dark blue and silver of the churning sea and a black anchor [chastity].  The only difference between the arms of Pius X is a crenelated silver wall with an open gate arch between heaven and the sea, which is a play on the new name of the new Patriarch.

The Spanish Vaticanist suspects that this is not an accident, as far as what will be confirmed.  The coat of arms  was greeted by the new Patriarch of Venice in a conscious imitation of his predecessor, Giuseppe Melchiorre Cardinal Sarto, the later Pope Pius X, as he himself stated.  "That doesn't look bad to me. On the contrary", so says Cigoña

Patriarch Moraglia, born in 1953, from Genoa, was ordained a priest by Giuseppe Cardinal Siri.  He is considered to be a Sirian and a Ratzingerian and is expected to be named a Cardinal in the next Consistorium, which will probably take place at the end of 2013.

Link to katholisches.net...
Posted by Tancred at 9:30 PM No comments: