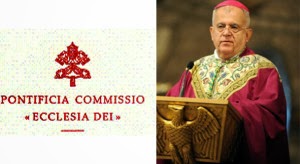 (Vatican) The dismissal of Cardinal Mauro Piacenza, prefect of the Congregation for the Clergy, and his appointment as Cardinal Poenitentiary had already been foreshadowed by Katholisches.info, as well as the appointment of Monsignor Nikola Eterovic, the new Apostolic Nuncio to Germany and his replacement as Secretary of Bishops' Synod by Archbishop Lorenzo Baldisseri (see separate report Pope Francis Removes Cardinal Piacenza as Prefect of the Congregation for the Clergy ). Pope Francis made some important personnel decisions this last Saturday: they concern the Pontifical Commission Ecclesia Dei and the CDF.

The traditional American and Dominican Curial Archbishop, Monsignor Augustine Di Noia, was again named by Pope Francis, barely more than a year since being removed from the Pontifical Commission Ecclesia Dei. The Pope appointed Archbishop Di Noia as Assistant Secretary of the Congregation.

Archbishop Di Noia was appointed by Pope Benedict XVI. on the 26th of June 2012 to the Commission Ecclesia Dei, which is responsible for the communion with Rome of traditional orders, communities and groups. It was for these especially that the office of Vice-President had been revived. The appointment was made ​​less than two weeks after the collapse of the talks between the Holy See and the Priestly Society of St. Pius X, as the agreement receded in the distance again. On the 14th of June the Superior General of the SSPX, Bishop Bernard Fellay, met in Rome together with the then Prefect of the Congregation of the Faith, Cardinal William Levada. Instead of the expected agreement, the exact opposite happened. Since then, the unification efforts are on hold.

The appointment of the Dominican Di Noia was interpreted as a signal to give new impetus to the efforts, but it did not succeed. A few months after Archbishop Di Noia had become Vice-President of Ecclesia Dei, Pope Benedict XVI. then made Monsigor Guido Pozzo a Curial Archbishop and Papal Almoner on the 3rd of November. The resignation of Benedict XVI. could recognize in retrospect that the Pope already prepared his retreat, and he wanted to reward Msgr Pozzo, his faithful employee, with a promotion.

Pope Francis: Dismantling the Past Personnel Decisions of Benedict XVI. at Ecclesia Dei

Pope Francis has now dismantled the past personnel changes of Benedict XVI. to the Commission Ecclesia Dei. On the 3rd of August he appointed Archbishop Pozzo back as Secretary to the Commission. Now he has reassigned Curial Archbishop Di Noia back to the CDF. There, the American had been Under Secretary from 2002-2009. He then spent three years as Secretary of the Congregation for Divine Worship. Now he will be Assistant Secretary. For a better understanding: the Archbishop was formerly the number four at the Holy Office in 2009, which was until 2005 under then Cardinal Joseph Ratzinger, then Cardinal William Levada, he is now number three to Curial Archbishop Gerhard Ludwig Müller in the Holy Office. Archbishop Di Noia enjoys a good reputation in traditional circles.

In connection with this personnel change, Pope Francis has confirmed the current Prefect of the Congregation for Doctrine and the Faith, Archbishop Mueller, the former Archbishop of Regensburg, at the CDF. With the election of a pope all offices are automatically forfeit in the Roman Curia. Pope Francis habitually confirmed all incumbents provisionally until further notice. Now its proper acknowledgment in office is for the next five years for the Prefect of the Faith. Archbishop Mueller thus, with the newly appointed Secretary of State Monsignor Pietro Parolin also, the first contenders for the award of cardinal by Pope Francis.

Also confirmed in his office was Curial Archbishop Luis Francisco Ladaria Ferrer as Secretary and thus number two of the CDF. Archbishop Ladaria is responsible for writing prepared, official homilies and speeches of Pope Francis, which are used in Papal Masses and the traditional catechesis during the general audience every Wednesday (see separate report Luis Ladaria Ferrer - The Theologian Behind the Speeches of Pope Francis [Coming] ). The regular term of office of Secretary lasts three years.

Petition to Support the Franciscans of the Immaculata

Edit: this just in which we found on Messa in Latino regarding the Franciscan Friars if the Immaculata. Here's a slight google translation with some editing. You can go to the main site and send an e-mail using Corispondenza Roma. Thanks. Please let us know in the comments if you've signed it. Hopefully it will embolden others to do so.

on July 11, the Congregation for Religious has "police" the institution of the Franciscans of the Immaculate, forcing them to abandon the traditional Mass, which they celebrate freely, according to a universal law of the Church, never repealed and confirmed by the motu proprio Summorum Pontificum of Pope Benedict XVI on 7 July 2007.

In the canon 212 of the Code of Canon Law currently in force states that the faithful "...have the right, indeed at times the duty, in keeping with their knowledge, competence and position, to manifest to the sacred Pastors their views on matters which concern the good of the Church. They have the right also to make their views known to others of Christ's faithful, but in doing so they must always respect the integrity of faith and morals, show due reverence to the Pastors and take into account both the common good and the dignity of individuals." In the light of this canon, and what forces the sensus fidei of every baptized person, I feel obliged to send an open letter to His Eminence Cardinal João Braz de Aviz, Prefect of the Congregation for Institutes of Consecrated Life. If you share my concerns, I thank you if you will join this initiative, addressing the message shown in the window below.

Do not forget to sign the letter with your name, with your e-mail address.

Thank you to join this initiative, promoted for the greater good of the Church and of souls.

With esteem and friendship,

Link to the petition which you can send already in Italian to the concerned Prelates in authority, here.

The Letter as Follows:

The decree of July 11th 2013, signed by you, by which the Franciscans of the Immaculate have been “commissioned” and forbidden to celebrate the Mass according to the ancient Roman rite, constitutes an unjust act in regard to this religious Institute, whose honour it diminishes, but above all it represents a violation of the universal laws of the Church, in particular of the motu proprio Summorum Pontificum of July 7th 2007 of Benedict XVI, which has never been abrogated and which grants, to every priest, the freedom to celebrate the Mass according to the “extraordinary” form.  This objective lesion of the right cannot but concern all those who believe and love the liturgical tradition of the Church and, also in the same spirit, who fight in defence of life, of the family, of the pontifical Magisterium and of Christian Civilisation.

The canonical law gives me the authority to express, in a respectful manner, my sorrowful perturbation, my strong protest and my vibrant appeal so that every obstacle to the free celebration of the traditional Mass for every priest may be removed and that the Franciscans of the Immaculate may continue their precious apostolate which has done so much good and will still do so for souls.


Yours respectfully in Christ