Edit: Ninety years ago on April 1st, 1922, the Emperor of Austria-Hungaria, Blessed Karl Habsburg, succumbed to pneumonia in the presence of his family, offering his sufferings to the last for the good of his people.   He is known everywhere in Europe today, even to our enemies, the Republicans, as the Peace Emperor.  He was banished to the island of Madeira by the machinations of President Woodrow Wilson who envisioned a Europe without Monarchs or Empires after attempting two times to regain his rightful throne.

And yet, even his republican enemies at home remember him as the Friedenskaiser, the peace Emperor. When meditating on the life of Blessed Emperor Karl we see an encouraging example of faith. We are reminded that just rule is deeply anchored in faith. We are reminded that we can only order ourselves and the world around us well when we join our will to the will of the Father in heaven and so lay to rest all enmity between God and us. Only when we are reconciled with God and struggle to abide in peace with Him can we genuinely struggle for peace on earth. As Emperor and King, Karl sought always to imitate Jesus, the true Solomon, the true bringer of peace, and so can be called a son of God.

From an article by Crisis.

Here's a video from Gloria.tv with magnificent film footage of the Emperor in his exile on the island of Madeira where he lies interred at the church of  Nossa Senhora do Monte.  The inscription on his coffin reads, "Fiat Voluntas Tua" (Thy Will be Done)

Blessed Karl of Ausria, pray for us. 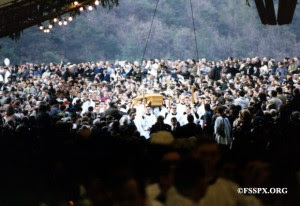 The Society of St. Pius X’s District of Switzerland invites all the faithful to come to Econe on March 25, 2011, for the 20th anniversary of the death of Archbishop Marcel Lefebvre.

10:30 Sung Mass. Fr. Franz Schmidberger, District Superior of Germany and former Superior General of the Priestly Society of St. Pius X will preach in French and in German.
12:00 Ceremony at the grave.
13:00 Picnic lunch (a warm soup will be served to all)
14:00 Memories of the life of Archbishop Lefebvre

H/t Marie at AQ
Posted by Tancred at 1:39 PM No comments: