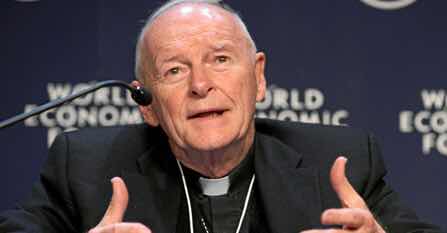 Sufi Dancers in the Church 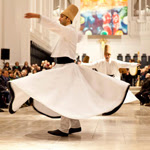 Edit: the abomination of desolation. This report comes from the German District of the SSPX.

Incomprehensible but completely in the spirit of the Council, which is stated in the Constitution “Nostra Aetate”:

The Church regards with esteem also the Moslems. They adore the one God, living and subsisting in Himself; merciful and all- powerful, the Creator of heaven and earth,(5) who has spoken to men

We learn how this “adoration” appears in practice from the Augustinian Church in Würzburg. There the Islamic Sufis dance at the beginning of Lent!

The Augustinian Church looks like a museum or a gathering hall after its renovation, than a Church. But as the “Dance of the Sufis” takes place, its formal desecration a church is complete.

Why the Bishop of Würzburg is also “silent” here remains a mystery.

In the announcement on the homepage is is described as an “Ensemble for Islamic Music”:

In the context of the 12th Würzburg Lenten Courses in the Augustinian Church, there will be traditional Islamic Dervishes dancing on Saturday (7:30). The course of the evening will be in the hands of Seref Dalyanoglu, who is also the representative for the Dervishes and other musicians of the Ensemble for Islamic Music. 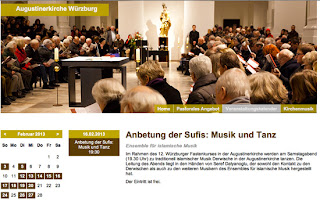 Worse still is a participant's obituary of the event. It had not only been a dance, “but much more a special form of prayer to God by the Sufis”.

Source is piusbruderschaft.de, with more photos...
Posted by Tancred at 9:18 AM 3 comments:

Edit:   One of our friends sends us news that a parish in the Archdiocese of Chicago, which has a history of inviting "preachers from all over the country" and  had invited a homosexual Anglican priestess to deliver the sermon.  The event took place on 25 March, 2012.  There's been no comment on it at all as far as we know.

The parish is called Old St. Patrick's is to religion what going to Farrel's old tyme restaurant is to food. Except in the case of Farrel's, you're not going to get food poisoning or imbibe the pernicious doctrines of heretics. St. Patrick's is a suburban-like church with a Unitarian ambiance, complete with hip religious sensibilities of the aging youth cult, that is to say, the emphasis is on the here and now.  Indeed, looks like they've slated an hour for confession on Good Friday.  How generous!

Here, at Old St. Patrick's, you can also give a welcome to a homosexual Anglican priestess.

Each year during Lent, it has been our custom to invite distinguished preachers to share their reflections on the season with us. Whether through a Lenten Mission, Liturgy, or Evening of Reflection, Old St. Patrick’s has been proud to host some of the finest preachers throughout the city and country. For Lent 2012, Old St. Patrick’s continues this tradition.

For the Sundays of Lent leading up to Palm Sunday, Old St. Patrick’s is honored to host an extraordinary opportunity to hear five outstanding, thought-provoking, and inspiring preachers.

In the spirit of the Second Vatican Council, as we approach the 50th anniversary of its commencement, Old St. Patrick’s will honor the Roman Catholic Church’s commitment to ecumenism [sic], biblical scholarship, and social justice in the celebration of our Sunday Liturgy, as these five guest preachers break open the Word.

In order to accommodate all members, visitors and guests who wish to witness this Series, we will host extended seating in the Church Hall with a live-feed from the Liturgy in the Church.

Here's a description from the parish newspaper:

The Rev. Bonnie A. Perry is the rector of All Saints’ Episcopal Church, where she combines her passion for preaching and worship with her commitment to service and justice. In 1993, she and parishioners began distributing groceries to neighbors in need on the front steps of the church. By 2001, All Saints launched Ravenswood Community Services, a non-profit organization which provides hunger relief, health services, and life skills education in the Ravenswood and Uptown neighborhoods. These days, more than 400 neighbors make their way to All Saints’ for food, volunteer opportunities and community each week.


Not only is she a homosexual, but she's among the front runners to become a Bishop in her dying and decadent religious body. Chicago Tribune wrote this:

But as one of three openly gay candidates who could be selected for the job Saturday--there are seven nominees in all--Perry, 44, stands at the edge of a global controversy threatening to split her church.Church leaders in Africa and South America have severed ties with the Anglican Communion since their American counterpart, the Episcopal Church, consecrated a gay bishop, New Hampshire's V. Gene Robinson, in 2003.