Current State of Abortion in the US

Apparently, our enemies at The New York Times are aghast that Texas's recent anti-abortion law has actually been upheld in federal court. With this, we should also delight in the progress we are making in Wisconsin where a bill is underway to outlaw abortion in those instances where the fetus will experience pain (i.e., after twenty weeks of gestation). This legislative progress naturally mirrors trends in the broader culture where only 41% of Americans now consider themselves "pro-choice." In short, we are winning and our liberal opponents have begun to gnash their teeth. Continue to pray and fast for the Pro-Life movement worldwide.


In the spirit of "tacky liberal incoherence," we should note that the Texas bill primarily aims to regulate abortion clinics to ensure that they are safe. Given what happened in Philadelphia, this should be a top-priority for all legislators nationwide. And insofar as lefties are fond of insisting that abortion ought to be "safe, legal, and rare," it is odd that they too would not support legislation requiring abortion clinics to be safe. Or perhaps by "safe, legal, and rare," they really mean "often-unsafe, tax-payer-funded, and common."
Posted by Maximilian Hanlon at 10:17 AM No comments:

It is an open secret that the staff of the Cardinal  is infiltrated by neo-Liberal abortion lobbyists .  By Markus Miller. 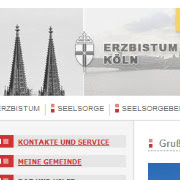 (kreuz.net) In Germany there is a 'Catholic Federated Society of Works for Marriage, Families and Life Counseling, Telephone Counseling and an Open Door'.

It was established by the Bishops Conference as a Super-Diocesan point of contact for questions of Marriage, Families and Life Counseling.

Its current chair is the Diocesan Administrator for Marriage, Family, Life Issues in the Archdiocese of Cologne, Dr. Hannspeter Schmidt..

The Association resides in Bonn and also the Archdiocese of Cologne.

Joachim Cardinal Meisner of Cologne has always presented himself personally as a determined defender of life.

He has courageously compared the murder by abortion of millions of innocent children with the atrocities of King Herod and also of Hitler and Stalin.

He also gets to be cursed by the mass media, which finds itself safe in the hands of the international abortion mafia.

It is, however, an open secret that Cardinal Meisner's staff is infiltrated by neo-Liberal abortion lobbyists.

The Cardinal appears to be effectively powerless against this.

The so-called 'Catholic Work Association' has participated for years in a collaborative effort.

This bears the name 'German Work Team for Marriage, Youth and Family Planning.'

The other members of the 'Work Team' are:

- a 'Conference Assocation for Childcare'

- a 'German Work Society for Youth and Marriage Counseling'

- the 'Evangelical Conference for Families and Life Planning'

That is an bitter enemy of the Church

'Pro Familia' is a charter member of the 'International Planned Parenthood Federation'.

The first president and founder of 'Pro Familia' was the former National Socialist politican and racist Hans Harmsen († 1989).

'Pro Familia' insists upon the right of a mother to abort her own child.

The grouping is part of a world wide string pulling operation of the international abortion industry.

These are advertised to the public deceptively under the euphemistic title "Medical Center".

Such places for the killing of children are located in places like Rüsselsheim, Bremen, Saarbrücken, Mainz, Kassel and Berlin.

'Pro Familia' propagates a sexual morality that is diametrically opposed to Catholic teaching.

This is the Consequence

The so-called 'Work Team' sees its mission under the direction of 'Pro Familia' as, providing "Essentials and Standards in Institutional Planning" of youth, married couples, families or even pregnancies.

For this purpose, the counselors have partners to cooperate with.

For that reason the website of the Work Team has published a written literature.

These are also combined together with the 349 Marriage, Family and Life Planning operated by the Catholic Church and their 1.200 skilled employees.

The publication list contains among other things advertisements for 'Pro Familia Magazine'.

That is the house newspaper of the German abortion lobby.