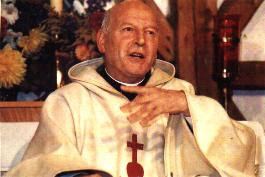 The Abbé de Nantes is a Catholic priest and theologian who believes that the new "orientations" of the Second Vatican Council (1962-1965), upheld and further developed by Popes Paul VI and John Paul II, have been an unmitigated disaster for the Church. For him the Council and its upholders have demonstrably taught, or at least insinuated, novel and unCatholic beliefs, which have never before been officially maintained in the Church. In fact, such beliefs had been forcefully condemned by previous Popes, right up to Pope Pius XII who died in 1958.

Despite the Abbé's detailed and well-substantiated criticisms over these last thirty-five years, the authorities in the Church have consistently refused to use their powers to deal objectively with his accusations. Instead of taking up his arguments in their own right (argumentum ad rem), they have preferred to attack his person (argumentum ad hominem). Hence, they have directed their wrath against his alleged subjective attitude, his "tone", his "contentious spirit", etc. This was particularly apparent in 1968 when the Congregation for the Doctrine of the Faith examined his complaints against Vatican II and Pope Paul VI. Instead of condemning his alleged "errors", the Congregation contented itself with stating that he had been disqualified... rather as if he had been a professional sportsman who was not abiding by the rules of the game!

Today the Abbé de Nantes is well-known and even feared in Rome. His three Books of Accusation against Pope Paul VI (1973), against Pope John Paul II (1983), and against the author of the so-called Catechism of the Catholic Church (1993) have proved to be impossible to answer. His accusations are of the most devastating kind imaginable in the Church, involving open charges of heresy, schism, and scandal against the Vicar of Christ on earth. But despite this, he has never been condemned for any kind of error against the Catholic faith and for thirty-five years his doctrinal criticisms have remained without a formal reply from Rome.

http://www.crc-internet.org/abbe.htm
Posted by Tancred at 12:17 AM 2 comments: