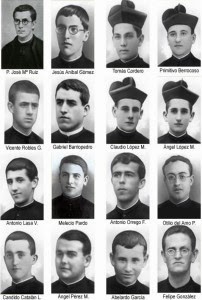 (Madrid) In a sympathetic video,  the martyrdom of the Claretians in the Spanish Civil War is narrated by children for children. The Claretians are a community of priests founded by St. Anthony Mary Claret in Spain as a missionary congregation in 1849. Its official name is Cordis Mariae Filii (CMF), Sons of the Immaculate Heart of Mary .
In 1936 the Seminaries of Siguenza (Guadalajara) and Fernán Caballero (Ciudad Real) murders were carried out by Red combatants out of hatred for the Catholic faith. 14 young seminarians aged 20 to 26 years old, a young priest of the Order and a friar were murdered. The beatification of Father José María Ruiz Cano (29 years) and his 15 companions took place on  13 October 2013 .
A total of 271  Spanish Claretians fell victim to the Republican murder spree by Communist, Anarchist and  Socialist militias. The Order today operates in 64 countries with 19 bishops, 2,155 priests, 164 brothers, 5,553 students and 120 professed novices. The Order also has offices in Austria, Switzerland and the Federal Republic of Germany, where there is the provincial leadership in Würzburg.  They are active in the United States as well.
Posted by Tancred at 4:23 PM No comments: