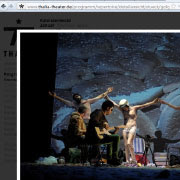 Posted by Tancred at 7:01 PM No comments:

Within a week Christ will be ridiculed in Hamburg. The Society of St. Pius X is encouraging the Archbishop Werner Thissen of Hamburg to make an act of reparation.


(kreuz.net, Stuttgart) On the 23rd of January the "Thalia Theater' in Hamburg is introducing the blasphemous piece 'Golgotha Picnic'.

This public act of agitation portrays Christ as a terrorist.

In addition a crucifixion is enacted with a half-naked prostitute.  The tramp has a motorcycle helmet with a crown of thorns painted on it.

In the piece more naked exhibitionist enter whose reproductive organs are projected on a screen for the titillation of the audience.

In France there are thousands of youth on the street.


The Society of St. Pius X jumped into the breech today.  They protested against the blasphemy in a press release.

This requested the German Bishops to participate in the protest.

The speaker for the Society, Father Andreas Steiner, had e-mailed the various press offices of the Diocese.


He recalled that in France, many Bishops -- among them Msgr Dominique Rey (59) of Toulon and Mons. Raymond Centène (53) of Vannes -- condemned the piece in strong terms.

Cardinal André Vingt-Trois of Paris called a prayer vigil against the piece in his Cathedral.

Father Steiner is hoping naively that the German Bishops will follow these examples.

His expectation has even extended elsewhere, that also Protestants, Jews and Muslims will protest.

In fact, the only Christians you could realistically expect to be at the theater will be Traditionalist.
Link to original...