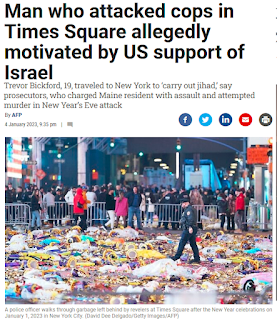 Meanwhile, Muslims are brazenly planning and accomplishing acts that put January 6th to Shame
Edit: if Minnesota weren’t the home of a violent and militant Islamic minority, we wouldn’t be worried about a professor teaching art history showing renderings of Mohamed.
Catholics attempting to cash in on the victim grievance deck are going to lose.  These are agendas to fit Leftist ideologies.
[Hyperallergic]  Mustafa ibn Vali, “The Angel Gabriel meets ‘Amr ibn Zaid (the Shepherd)” (c. 1595), depicting the Archangel Gabriel and shepherd ‘Amr ibn Zaid from the Siyer-i Nebi (the Life of the Prophet) (via The Metropolitan Museum of Art) Hamline University, a private liberal arts school in St. Paul, Minnesota, has reportedly declined to renew the contract of a professor who showed their students Medieval paintings depicting the Muslim Prophet Muhammad. On October 6, 2022, the adjunct professor, whose name has not been disclosed, displayed the images during an online lecture.
The incident gained traction after a student in attendance, Aram Wedatalla, president of the university’s Muslim Student Association (MSA), raised the issue with university administrators following a conversation with the professor. As reported by Hamline University’s student newspaper The Oracle on December 6, a video recording of the lecture, alongside shared email correspondence between the professor and Wedatalla, indicated that the professor issued a two-minute content warning.
This warning was meant to allow students who were uncomfortable with viewing the images to exit the call or shut off the video component of the Google Meet room prior to proceeding with the Powerpoint slides featuring the images in question. “I am showing you this image for a reason,” the professor said in the video, according to The Oracle. “And that is that there is this common thinking that Islam completely forbids, outright, any figurative depictions or any depictions of holy personages. While many Islamic cultures do strongly frown on this practice, I would like to remind you there is no one, monothetic Islamic culture.”
Meanwhile!
AMDG
Posted by Tancred at 3:22 PM