[Cuzz Blue] The NHL over the past year has made a concerted effort to portray itself as America’s most woke sports league, even at the expense of player safety. On Tuesday night, however, an NHL player actually decided to take a stand against his own team’s effort to push the woke agenda.

Philadelphia Flyers defenseman Ivan Provorov, a devout Russian Orthodox Christian, refused to wear his team’s gay pride jersey Tuesday night. He explained that he made a choice to stay true to himself and his faith.

Provorov also made clear that he respects those who have a different view from him and did not elaborate further. 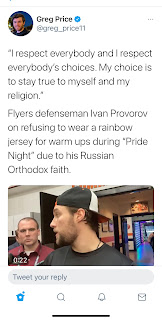 May God Bless and protect this young man. I hope he hasn't taken the death jab.

Thank God for the courage of this young man. I pray for all to follow him.