Edit: His Holiness was truly one of the least destructive popes of the late 20th century, and that's saying something. What will the Benevacantists do now?

It's been hard not having a pope with his intelligence and sensitivity on the throne.  Even though he was a liberal, he was a lot more loving and sincere than most others.

Of course, his funeral Mass will likely be a post-V2 canonization Liturgy with music by sex predator David Haas.  I'm guessing it will, best case, be a "reverent" Novus Ordo in Latin.  The best outcome would be a full pontifical High Mass according to the pre-1955 Missal.

Now is a great time to pray for his soul. 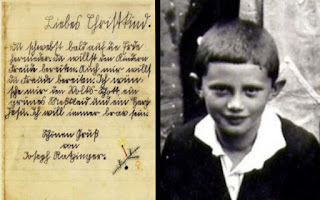 Thank you, Tancred, you captured my perspective.

He did not receive Last Rites.

He received that virtually worthless N.O. blessing of the sick instead.

If for no other reason than his Motu made all the modernists screech like demons doused with holy water -- he earned them.

He received the Sacrament of the Anointing of the Sick in Aramaic just so the 1955 Catholics would have no argument with validity.

I would be surprised if there is any "Saint-making" going on any time soon with this one.
The Tribe would scream bloody murder because of the pic of Ratzinger in his German Army uniform.
That is who has been successful in holding up Pius XII canonization since 1958.

I don’t believe he’s dead. He was probably snuck out a back door in the Vatican When they show the funeral pyre, play close attention to his ears 👂 👂. They are the hardest part of the body to copy.

Screw the tribe and their conciliar church

"Screw the tribe and their conciliar church.
Not only is the unfortunate Amon 2:12 AM, upset, they/them is also confused about tribal identities and achievements.
Get help.

You sure showed those Sedes, Gaybrielle!!

What did Gaybrielle say this time ?

Ratzinger’s response to the question “How many ways are there to God?” He replied:

“As many ways as there are people. For even within the same faith each man’s way is an entirely personal one.”

“In that respect there is ultimately one way, and everyone who is on the way to God is therefore in some sense also on the way to Jesus Christ.”

“But this does not mean that all ways are identical in terms of consciousness and will – but on the contrary, the one way is so big that it becomes a personal way for each man.”