Alleged shooter in Chicago, Bobby Crimo III. The major news organs are trying to peg him as white, but he doesn’t quite look the part.

He’s actually a rapper of some kind.

Edit: [Copenhagen] looks like an Aloha Snackbar. Oy veh, this news doesn’t fit the “this is an American problem” narrative.

If your real citizens aren’t armed, you’ll be subject to Fuzzywuzzy grooming gangs from darkest Kafiristan.

And unless I digress, these people are the ones the Crusades were meant to turn back. Why don’t we deport them to Israel?

The reports are saying a “Danish man” was responsible. [Updated: Turns out the Danish shooter was really Danish, but was out of his mind from, you guessed it, psychoactive medications.] We all know what that means! [Of course, this is being spun as a win for Danish hoplophobia by the usual suspects everywhere.] 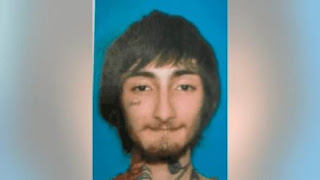 And not to be upstaged, a good ole boy in Chicago has declared war on a Highland Park July 4 parade killing six and wounding many others.
Well done America.

A good ole Proud Boy fulfilling the American Dream of shooting as many people as possible at any one time.

No wonder those millions of Third Worlders want to migrate to the Land of the Free and the Home of the Gun.

He looks like he could be one of your flock, Gaybrielle. He’s a whigger emo, probably Marrano, and highly medicated.

He's Babu the Dog Boy and he's running as a GOP candidate for President in 2024 against Bonker Donald.
Babu just adores meeting people and shooting them just like any Patriot.

Another shooting in Lori "Popeye" Lightfoot's Chicago.
The shooter is white, so a fuss is made.
The umpteen blacks killing each other every week??
Let's not mention that. You RACIST!

He is an antifa faggot

The US would have less violent crime than Europe, period, if minorities were taken out of the equation. Black males account for most of the mass shootings.

Says Popeye Lightfoot and her degenerate band of faggots.

What happened to your video??

Dreher has such crappy takes.