Bergoglio Wants Men of the West to Surrender 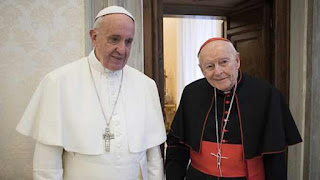 Edit: Of course, a south of the border type with militant Marxist attitudes, like Bergoglio, will disapprove of free men being armed, but this Pope is hardly disinterested. Rather than representing the Church founded by Jesus Christ, this evil man seems desirous to style himself as a kind of celebrity spiritual leader of the Globohomo with its schemes to destroy the West and enslave the human race. It’s a little hard to understand why a man, even an Ersatz Bishop, whose life is defended by men who carry guns, would want to deprive others of the right of self-defense.
Actually, if Bergoglio agrees to dismiss the Swiss Guards and forbid any security detail protecting him from carrying guns, he might be credible.
Rather than admitting this clear conflict of interest, Bergoglio adds his two cents in a conflict that is calculated to disadvantage free men in the United States. Why doesn’t he spend more time protecting victims or human trafficking in Mexico or the victims of abortion numbering in the millions and leading to an ever darker and more economically disadvantaged world. His indifference to the welfare of workers and the unborn isn’t all, he doesn’t care about the victims of priests and bishops he protects.
Rather than protecting the law abiding people of Western countries from being swamped by lawless murderous immigrants, Bergoglio encourages their lawless rampage. So his school shooter, Salvador Ramos,  surely must be one of Bergoglio’s immigrants, no?   Allegedly, he was born in Fargo, North Dakota, but it’s very likely his parents and grandparents are themselves immigrants. 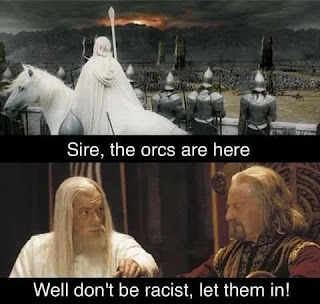 Abolish the Second Amendment. That might help but the real problem is that the US has come to define its national identity as a gun owning society.
Generations of kids will be permanently traumatized by being subjected to a school curriculum that includes regular 'active shooter' lockdown exercises.
No wonder America is the most dangerous place on earth.

That’s why you can’t criticize sodomites, groomering gangs and j-words in UK without doing jail time.

An entire nation of friggin' gun nuts slaughtering one another in the tens of thousands every year and justifying it all by appealing to their bloody Constitution!
Good grief!!!

Free men have always had the right to bear arms. It's only in pozzed, post-Christian countries like the UK where raping Islamists defend their drug territory and hack at each other and even innocent bystandarders with machetes and knives, and guns.

"......where raping Islamists defend their drug territory and hack at each other and even innocent bystandarders with machetes and knives, and guns."

“The darkness first takes our children who then kill our children, using the guns that are easier to obtain than aspirin. We sacralize death’s instruments and then are surprised that death uses them.”

The single issue 'pro-life" gun nuts are clearly not getting it that pro-life extends beyond live birth. Trump will be there at the NRA gun show in Houston next week. What a fraud.

Typical south of the border histrionics. Guns are as easy to buy as aspirin? Lol, the arsenal possessed by that Mexican kid on meds costs somewhere north of $4,000. Where did he get the money at 18, anyway?

This is what passes as episcopal leadership these days.

Guns are just useful tools, I don’t know what this corn stone grinder pretending to be a bishop is talking about.

The same people who want gun restrictions are the ones to want decriminalization of Marijuana and other drugs. Drugs kill! And the gun control Corporate-Approved activists don't say anything about that.

The same people who want the law abiding Americans disarmed are themselves protected by guns. Leave US borders undefended from invading criminals and disarm law abiding citizens? These shootings occur in ridiculous "gun free zones", where the poor kids still sent to US "schools" are sitting ducks. But the thing is, cui bono? When the commie pols grin and salivate over not "wasting a crisis", they will create "crises" to exploit, and push an agenda. This mass shooting has a lot of questions around it as well, such as how did this kid get the money to buy the expensive arms he had? The batman theater shooting as well, witnesses saw more than one shooter, and they find the alleged (patsy) shooter so full of drugs he made no sense sitting outside made up like the Joker. Naaa, too many questions, too convenient, and now this pattern of cops standing down and allowing kids to be murdered?? Targeting distraught parents instead? Why bother even showing up?? Those who think gun laws will stop this better disarm the US deep state as well, because so many of these shooters" were "known to the FBI", or "known to law enforcement". Chicago has strict gun laws, yet, dozens are shot every weekend. No one cares about that, or questions why the gun laws don't work. This is all about disarming law abiding people so they can be eliminated easily.

Actually, if you correct the demographic imbalance in the US and focus on areas inhabited primarily by Europeans, gun crime would be lower than Europe.

"Death uses guns? That sounds kind of cool!"
The great genius of Jesus' teaching about the Kingdom of God is that he invites his listeners to put their feet in the sandals of their neighbor.
Would you think it 'cool' if death put a gun in the hand of a nut who turns up shooting your kids?

Death as Nicholas Cage on a Harley Davidson motorcycle, armed with an HK and automatic grenade launcher would be hilarious too!